As touted, we did a little veni vidi vici of the the Niagara Ragnar – it was a pretty good relay race with a spectacular finish venue.

This year we ended up with a team of 7, technically we were not an “ultra” team (6 people or less), but we were still pretty happy with the mileage. Each runner had between 22 and 32 miles and 5 or 6 separate legs.

The race started in the town of Coburg, Ontario. Not much to say here, it was a small town on Lake Ontario. It looked like a nice community but we were there for the start of the race and then away we went in our van.

Speaking of our van… 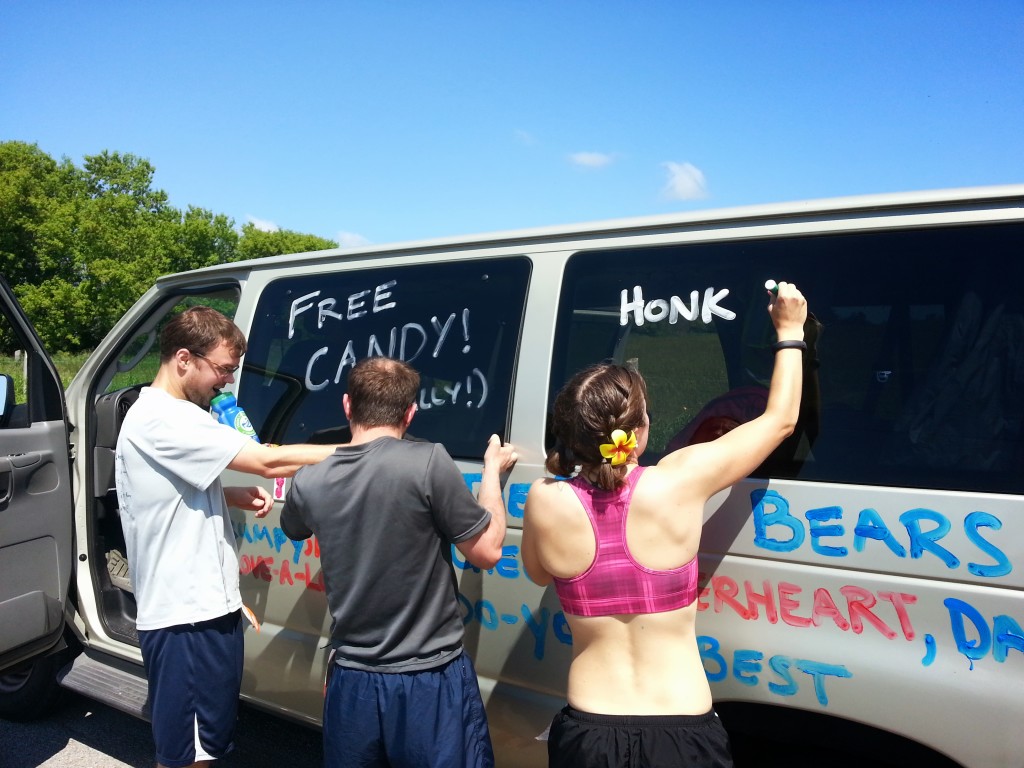 Two key improvements were made this year :

So, how was the actual race? Pretty good – there were the usual issues with a first Ragnar (first Ragnar along this course) that involved runners not knowing the route, wrong addresses, and a few other frustrating problems. It wasn’t horrible…but it’s not the type of thing you want to deal with when you are tired and, well, tired. I might sit this race out a year and see if they do it again and improve the logistics.

What the course lacked in the details department was made up by the scenery. I had some of the best, and most boring, routes I’ve had in a race. I can only speak for myself, but I heard most people making comments that the runs along the lake (and even through Toronto) were gorgeous.

The low point for me was running 6-ish miles on a road that paralleled a freeway with one of those large 20 foot tall cement walls next to it. Not so scenic. I also believe Jeney got to run through industrial Toronto near sunset with random creepy guys crossing the running trail and eventually finding her way to the exchange – that had the wrong address and no volunteers!

Ok, enough of that. What was pretty cool about this Ragnar for myself was getting to run along the top of the road leading into Niagara Falls. My last leg ended up being the last leg of the race; I got to spend 8 or so miles running towards the falls, through gardens, and eventually across the finish line that was a large lawn (hotel lawn?) that looked out directly onto the falls. It was a pretty impressive route and a hell of finish. I got some great looks from tourists that were walking down the road as I came sweating my ass off towards the finish line!

I only slightly apologize for the non-stop gif above – remember how the internet used to be about a decade ago??? 🙂

After we wrapped up the race and had our free beer(s) we were off to cross back into America and get our relaxing on with a house we had rented in nearby Grand Island, NY.

It ended up being a nice way to relax after the race, a pool and smallish hot tub hit the spot along with food and rest. All too soon we had to head back to Ithaca and prepare for our next weekend – a 9 hour drive south to Williamsburg, VA for the Rev3 Half Ironman relay!

As with all of these larger races it is really hard to explain just a page or two – if you have any questions let us know!