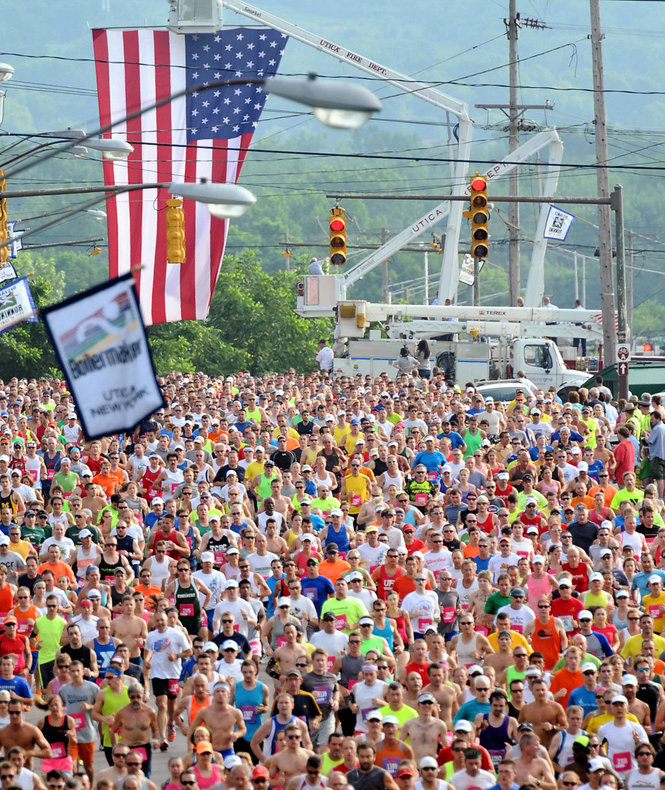 This one is a little out of order – after the Niagara Ragnar we went down to Williamsburg, VA for the Rev3 half Ironman relay. However, I wanted to put up this quick post about the 2013 Boilermaker first and get it out of the way – we have a serious backlog of posts!

We did the 2012 Boilermaker 5k; we had several friends who signed up and ran the 15k but we procrastinated and were too late to get an entry. For 2013 we made sure we signed up on time and headed up and over to Utica early (like 4am early…) to run the full 15k. This race is pretty impressive. The source is along completely shut down city streets and the entire town gets into it:

Due to the huge number of runners and logistics it is difficult to take anything with you that you don’t want to carry for 4+ hours – Jeney’s GPS watch was broken and she carried her phone, this is the only reason we have pictures!

After you finish the race you are immediately given water and ice, which is a relief since a race in upstate NY in the middle of July means higher temps and high humidity. We got lucky this year and had some cloud cover. A clear day for this race would be brutal.

After you clear the water and ice area and have started to sweat slightly less than the amount of water you are taking in you make a turn down the road towards the beer pavilion – and get your pick of popsicles and cold fruit. At the end of the road you are in the beer/food pavilion where you can drink as much as you want so long as you only take 2 beers at a time – not bad at all! The beer has been from Saranac both years and has always hit the spot. I suppose that it will always be a Saranac beer since you are drinking in their back parking lot…

Once you are done with the beer, food, and Sno-cones, you can make your sweaty way to a school bus shuttle that takes you back towards you car. Hopefully you brought a partial change of clothes and some deoderant.

A quick 2.5 hours later and we were back at home (about 1:30pm) and hitting the showers.

The Boilermaker is a pretty incredible race that caters to everyone from world class runners (not joking – check out the results and look at the top finisher’s pace) to amateurs and those just looking to log in 6.25 miles. This race will be a continuing summer tradition for us while we are in Ithaca.