Making Our Own Blackboard Wall

I’ve wanted to try making my own blackboard / chalkboard wall for a while now and Jeney was more than happy to help out – she likes blackboards more than whiteboards.

I had read on several different blogs and various websites that the optimum recipe was 1 tbsp of unsanded tile grout per 1/2 cup of paint. Easy enough, right?

I went to Lowe’s and picked up a quart (4 cups) of flat black paint and a bag of unsanded tile grout along with a few painting supplies (brush, roller, pan, etc). After calculating it out, we figured we should have more than enough paint for a wall – most painting places recommend a gallon of paint per 350 sq ft. No problem for a single wall (and a quart of paint)! We did think that the grout would soak up some of the paint but with the 350 sq ft rule we had more than enough.

First we taped off the area we wanted to paint – looking back we should have used even wider tape so we could be a bit more clumsy. An inch or two isn’t much when you painting! We also added an old sheet and some more tape along the baseboards in an effort to save our floors and boards. 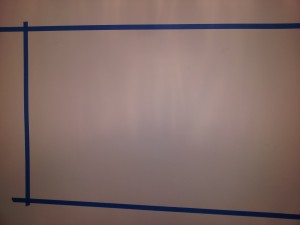 So, being unsure of how much we would actually need I put about half of the paint in a can for mixing and added 4 or 5 tbsps of tile grout. It immediately became clear that we needed more paint! We kept slowly adding paint until we had the whole quart in the mixer. As this point we were getting a little concerned – it was not mixing very easily and didn’t appear very “paintlike”. However, we kept at it for a few more minutes, hoping that the continuous mixing would result in the mixture becoming more like a slurry and less like congealed oatmeal…

I was about ready to throw in the towel at this point; Jeney had the marvelous idea of fingerpainting – and it worked! When the mixture was rubbed against the wall by hand it became slightly less viscous and actually resembled a thick paint! Our best guess is that it has to do with the volume of paint and tile grout that we were working with – I’m guessing that most people are painting very small areas and not mixing up large containers of this stuff. On went the fingerpainting – it took us probably an hour, but we got a fairly consistent covering of the blackboard paint on the wall. As we went along, Jeney went over the coating with the roller and very little pressure in an attempt to give it a uniform surface. It was the right idea but our consistency was fairly thick – it was tough to roll over without lifting small sections off or causing grout to “streak” through the paint leaving small clusters of lines where you could see the white wall behind it.

After letting it partially dry we made some attempts to cover these streaky areas up with the small amount of remaining black paint and the paintbrush. They really stand out in the pictures but aren’t too bad when viewing with the eye – especially now that we have chalk on it. So, surprise – it worked! It’s not the greatest blackboard ever made, but it is pretty cool looking and works just fine. We have wiped it down with a towel (need to pick up an eraser) and are looking forward to seeing how it holds up. Worst case scenario is that we have to sand it down and repaint; considering the supplies cost about $15 we aren’t too concerned.