This past weekend was the 35th annual Boilermaker road race. Jeney and I signed up too late (I might have procrastinated a little too long…) to run the 15k, but we did get in to the 5k. We had 3 friends that were registered for the 15k; we piled in to the 4runner and headed up north to Utica on Sunday the 8th.

The 5k started at 7:15, so we got to leave Ithaca before the crack of dawn – 4am. I can safely say that I don’t think I’ll be doing that too many more times! Anything before 5am just feels wrong, especially if you’re running that day. Next time I think we’ll stake out a hotel on the way or find someone to stay with. That said, it wasn’t too bad – 2 hours driving and we were there. 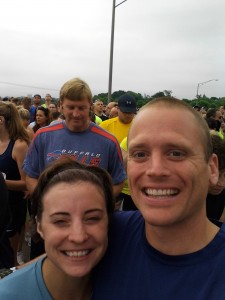 Hanging out at the 5k start line – post port-o-potties, hence the big smiles!

I knew that this was a “big” race, but having never been a part of a really large race I didn’t grasp the magnitude until we showed up and started seeing the crowds. After we dropped the 15k runners off at their bus shuttle area we drove over to the 5k parking area and proceeded to do the most important pre-race thing imaginable – go to the bathroom! There were lots of port-o-potties around, which is always nice to see – I like to imagine that there is a special place in hell for race organizers that skimp on toilets.

It turns out that there were about 3,000 runners there for the 5k -and 14,000 for the 15k! After listening to the national anthem we were off on a nice 5k course; it was the final 5k of the 15k route. The day probably couldn’t have been better, it was cloudy with the sun just starting to peek through the clouds and in the mid 60’s. Jeney and I hadn’t exactly been training for this, or even eating that well the past few days before the race so this was going to be more of fun run for us. We ran together for the first mile and a half and then separated out as we got into our own strides. We ended up running faster than we planned – it’s hard not to “race” when you are around so many people!

Jeney ended up coming in 2nd in her division – and 11th out of over 2000 women! I got 5th in my division and I think 80th out of the approximately 1000 men. Those results were a nice surprise as neither of us felt like it was a “great” run – but it did make us ready to get back into serious training for the Green Mountain marathon and Adirondacks ultra ragnar in the fall. 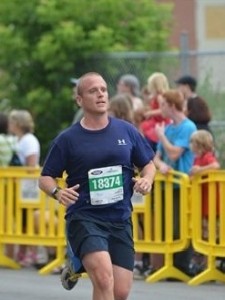 After our 5k we found some grass on the side of the road and joined the thousands of people lining the roads of the course to watch the 15k runners. I managed to snap a picture of the 1st place finisher, Tilahun Regassa, from Ethiopia – so impressive to see these world class athletes running! His mile pace was 4:37! In addition to the top runners, there were several racing wheelchair racers – that is some serious upper body strength to do 9 miles with your arms. 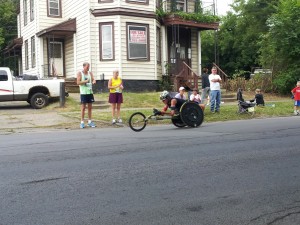 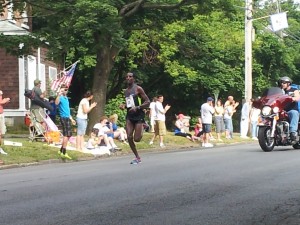 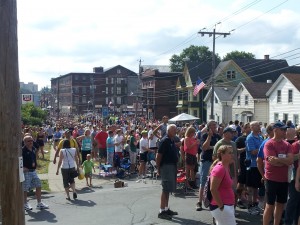 Crowd at the Boilermaker finish line

After our friends finished up the race we hung out in the massive crowds and had a couple of free beers and checked out the free stuff. It got pretty crowded but never overly so; it is really impressive that the race can be coordinated and set up to accommodate 17,000+ runners and their friends, family, and others. We made it out with a couple beers in our stomachs, some good free food, and a boilermaker pint glass. After catching the bus back to the parking area we headed to get some greasy fast food and make the trek back to Ithaca. 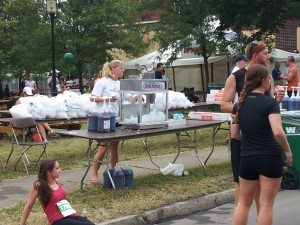 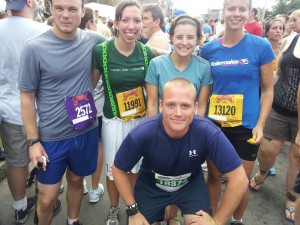 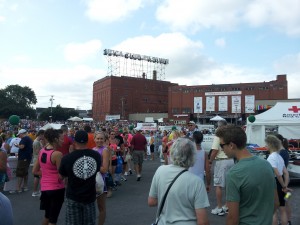 Brewery and post race party area at the Boilermaker

Lesson learned? Sign up early and do the 15k next year!