What do you do when you live somewhere without a big fireworks show nearby on the 4th of July? Throw a big party that involves beer and games of “skill” – all during the middle of a hot summer day! We started brainstorming ideas a month or two ago and several of us came up with the plan to have an afternoon of beer and beer related events at our new place. Luckily we have some friends that took up the bulk of the planning and coordination.

Last Friday we had the “Drafternoon” which was probably the greatest draft I’ve ever been too – it started out with beers and grilling, and ended with everyone picking a bottle out of a cooler while blindfolded. The drink you pulled out decided what team you were on:

The draft was complete with team appropriate music and outfits – it was awesome! Not only was it awesome, but I think it really helped get people excited for the 4th of July and the coming events. I ended up on Team Redneck 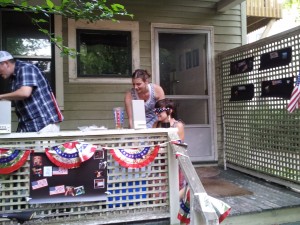 As it happens we ended up with 20 people actively participating, enough for 4 teams of 5, anyone that shows up the day of will get randomly assigned to a team. In the meantime we’ve been working more on the pool and have got it to the point where we are ready to let people swim in it. After a few more chemical treatments and a lot more vacuuming we pulled the last of the maple seeds/leaves (those helicopter leaves that spin around when they fall) out of the pool. Those things have been a huge pain in the ass to get out of the pool – more than 3 of them and they start to clog the filter – and there were hundreds in there!

Once we get things set up we should have the backyard fully ready for the Beerlympics, the pool ready to go…and…drumroll…a new grill! We sold our old washer and dryer last night after a few missed attempts over the past couple of weeks. We’re taking that money and getting a propane grill today. I got rid of my last one when I moved out of Seattle to go to grad school in 2010 – 2 long years later I’m getting a new one!

I’m going to be taking a ton of pictures tomorrow and plan on posting them up here after the event – we’re starting at 3pm and probably going to go until late at night…the 5th might not be quite as fun as the 4th!

Wow – that was a kick ass 4th of July! I think the short version can be summarized by this video:

Ok, things didn’t get that out of control, but we did have jousting! We ended up getting started around 3:45 with people showing up from around 1:30 until 4 or 5. We kicked off the Beerlympics with a team introduction, complete with music, as well as a good way to have pictures taken of each team before the mayhem began.

We did some moving around of events due to prep time (specifically the Pentathlon – that required some serious work as the cross country skiing was a group event with boards and rope…). The events got off to a great start – a side “competition” was each team continueing to drink their team beer to add to their wizard staff that would be used for the fencing/jousting at the end; the upside of this was that the games weren’t really need to get everyone inebriated, working on the staff took care of that! In all honesty, the games were planned really well. There was a total of around 17 beers required per team for the games, and with 5 people on each team that worked out to just over 3 beers each.

When the Pentathlon did come around we experienced our only real problem. The event got off to a great start, but one of the visiting team members tweaked their knee during the beer-back mountain portion (one person carrying another on their back while running across the yard – the person getting the ride has to chug a beer while being carried) and went down. He ended up having to go in and have his knee looked at by a doctor – it turned out to be a torn LCL. At the time we weren’t sure how bad it was, we’re happy that nothing “worse” happened as a result of falling.

As the games went on and the memories became a little hazier we even got some last minute team additions! People that hadn’t signed up to be on a team decided to also get in on the action and help us out.

By far one of the funniest events was the fencing/jousting. Some of the wizard staffs were in the 35+ beer can length. We ended up taping them to the competitor’s arms and basically having a no rules, crowd determines the winner, type of event. It was great! One of the event organizers, dressed up like Snooki, ended up loosing in the final round as he fell down while attempting to swing his wizard staff at the Damned Dirty Brit crusader – good times! 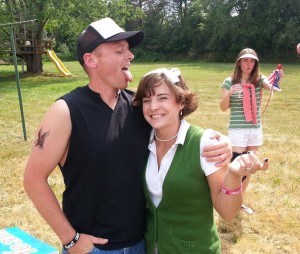 Cross-team break during the Beerlympics

We never did really “finish” the games – by the time we finished up with flip cup everyone was really hungry and happy to jump in the pool as well. With the games out of the way we concentrated on finding food to put on the grill and going to work on the remaining beer. All in all, it was a great night – but not one we will be reliving anytime soon. Time to give the livers a well deserved break while we really start training for the Ultra Ragnar and Green Mountain marathon in September / October.

Sadly there were two additional casualties – both of our phones! At separate points throughout the night we both got tossed into the pool with our phones. It will be interesting to see how we can work this out with Sprint – Jeney just got her Samsung Galaxy S3 a couple weeks ago and my Galaxy S2 isn’t exactly old either…going to keep the fingers crossed that this one work out ok. We are trying to try them out for a few days but are not really holding out much hope!

After 2 days in a bag of dry rice Jeney found some dessicant at her lab that she thought would work better than the rice. She brought it home and we put our phones in. 24 hours later I have a working phone! I can hardly believe that it is still working – I was probably in the pool for at least a few minutes before I realized the phone was in my pocket! I believe the dessicant is called Drierite. If you ever get your phone completely soaked I recommend finding some of this stuff, or something like it to help dry your phone out after you disassemble it. We honestly got pretty lucky, we both had tried plugging our phones in and turning them on, which is a big no-no with wet phones. Jeney’s is still drying out – after trying to turn it on this morning it began to “boot” and then black screened. We’re holding out hope that another day of drying will see it working again! 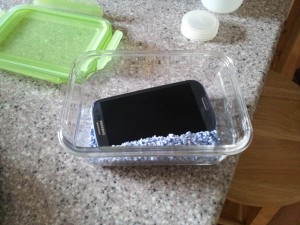 R.I.P. Jeney’s phone. It was a good little Samsung Galaxy S3. It even showed signs of life from time to time. Unfortunately it never really made it back and the choice was made to get a replacement. On the upside, we only had to pay a “small” ($150) replacement fee after making sure there was insurance on the phone.