This past Sunday we ran the Finger Lakes Runng Club’s “Forest Frolic” 15k trail run – what a run!

To properly set the story, I need to back up 2 days. It was Friday, I had a half day off of work and was feeling pretty good. So, in my heightened spirits, I decide that running with our running group for a road run on Saturday AND doing the 15k trail run on Sunday would be a great idea. More training, right?!?

The run on Saturday morning was great – best run I’ve had a month or two in terms of general feeling. It has really been warm around Ithaca for the past month or so, this has affected my pace – getting out earlier has helped, but over all it has taken me a good amount of time to start getting used to the heat and humidity. Last week we had also ordered water bottles that have a pouch that rests in the middle of your back – these worked great for the long run and will definitely be used more this summer. We did 11 miles, went out for some well deserved breakfast and spent the rest of the day doing some things around the house (painting) and lounging in the pool. In retrospect, this is where I should have been drinking even more water, eating more food, and stretching…

On Sunday morning we headed out around 7:30 for the trail and got to the start line fairly early. At this point we were both feeling pretty good. We knew it would be a tough run, the maps had showed 1700 ft elevation change and several large hills to contend with. After waiting around and meeting up with friends we were started off in one big group at 9am. The first half mile was a mad dash down an old power or logging road with tons of rocks, luckily I don’t think anyone went down here. After the half mile the course split into 3 different paths: to the right went the 7k runners, straight ahead went the 15k runners that wanted the steepest route, and to the left went the more sane 15k runners (Jeney and I included) for the “less steep” path. Everything was going fine for about 2 miles – after that the course became too steep for me and I had to start hiking/walking sections. Not exactly what you want to have happen on a 9+ mile course! 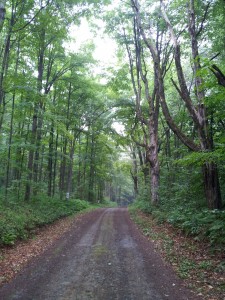 Driving down the trail to the starting area

The trail was pretty nice and after eventually making it to the top of some peaks the trail curved around and followed some power lines downhill before re-entereing the forest. I missed this turn and tacked on an extra half mile as I run down the road by myself before realizing I just might have missed the course turn! After chugging back up the hill I found the course again and got started towards the big intersection that dumps the 15k runners out onto the 7k course for the last section of the trail run.

Luckily, these trail runs are very well organized by the Finger Lakes Running Club and they had water set up in at least 4 spots along the trails – I would have been seriously hurting without these.

At the entrance to the 7k route the course became darker (more overhead coverage from trees) and a lot more exposed roots to watch out for. After running a couple miles of fairly relaxed up and downs the course crossed a stream and started on what was a reallllly long uphill section. This is where my tank hit empty. It has been awhile since I’ve felt like I just had nothing more in my system; no energy, no will, no nothing. I’d like to say that I sucked it up and was able to keep my legs moving in a slow jog to finish out the last three miles…but that didn’t happen! I had to walk the uphill sections of the course and even some of the level parts. I was able to force myself to trot along for a quarter or half mile at a time. At one point I started daydreaming about how I was going to eat so many cut up oranges when I finished…somehow that became the thing that my mind was focusing on!

Eventually I made it back to the entrance to the start area (the course is actually a big figure 8) and was able to keep the legs moving across the finish line. It wasn’t pretty, it wasn’t fast, but I finished. I can honestly say that this trail run was probably the hardest run I’ve had in my life. Next time I’ll rethink going for a long road run before a hard trail run!