The Gang Goes To Philly

This past weekend Jeney and I went to visit a friend in Philly – they are moving to Jersey next week and this was our last chance to see them in the city – and to have a free place to stay in Philidelphia!

I had never been to Philly before, and Jeney had been once before, to visit the same friend. I didn’t have much of a notion in my head for what to expect; I know a little of the history of the area, but to be honest the first thing that comes to mind when I think of Philadelphia is Rocky (the movie) and It’s Always Sunny In Philadelphia (the TV show).

We got into town on Friday night at about 9pm after driving down from Ithaca after work. The drive was pretty nice and Jeney drove the whole way down, which made it even nicer for me. Coming into the city after 4 hours on back roads and small highways was pretty cool. Philadelphia was lit up; many of the buildings had lights, the boat houses (crew boats) had lights all around the sides facing the river and highway, and some of the bridges of the Schuylkill river had lights across the bottom arches. It was a good way to come into the city on a Friday night! 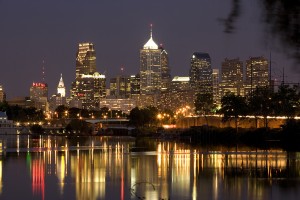 We ended up going out to a nice bar and grill type of place near the University of Pennsylvania. It is named “Local 44” and had a decent selection of beers from across the U.S. I was happy, and somewhat surprised to see Racer 5 there – I’ve been noticing it all over the east coast. It must be gaining a following or they are pushing it hard from California! Either way, I’m happy – that is one hell of an IPA. We had a bit to eat, nothing to write home about here; it was good food, we might have been too tired to really do more than shovel it in. After piling a few more beers on we headed back and crashed for the night.

A quick night it was – we woke up around 6am and decided to get a move on for our weekend training run. I was pretty excited about this as I hadn’t been running in a large city in a while and there were several river routes to choose from. We ended up doing our 12 miles along the Schuylkill, only about 1 mile at the beginning and end was through the area around the University of Pennsylvania. The river run was really nice – the path is fairly wide in most places and there were lots of people out running, jogging, and biking. They were setting up for a regatta further down the river, lots of boats and people out for the races. I recommend checking out the path if you are looking for a good run in Philly.

After recovering from the run and drinking an insanely large amount of water we hopped on the subway and went down to Reading Station Market. There was a diner there that was serving breakfast – nothing great, but it helped to get some bacon and potatoes in my stomach!

We wandered around the rest of the market and picked up a bunch of chocolate truffles and somehow, whoops!, found ourselves having a cold beer at 11:30 am. It was a great start to the afternoon! After putting down the beer we walked by a stand selling hot dogs that had been cooked in pretzel dough…it was even more amazing than it sounds. I love those things!

We also managed to make our way over to one of the many meat and cheese counters, along with the bread shop, and left the market with a healthy sampling of salami, swiss cheese, and a baguette for later.

Not too far from the market was Mac’s Tavern (Mac, as in It’s Always Sunny In Philadelphia). This turned out to be an interesting stop. We were all in the mood for another beer, and we got what we wanted. Jeney and I also noticed that they had what they advertised as “WTF” hot wings. Not ones to dodge a chance to eat some really hot wings, especially since most places don’t really have that hot of wings, we ordered up 8 of them. And then the sweating began. For real.

After we had put down half of the order we asked the bartender how they were made. He nicely informed us that it depends on how the cooks are feeling that day, but in general they put extra Sriracha (ok, nothing that hot there…) and then use Capcaisin dropped out of a bottle! Thankfully they didn’t put too much on – although these were the hottest wings I think I’ve ever had, the bartender told us that when they really put a lot on the cooks will come out and watch as the people eat them. Thankfully there were no cooks in sight!

After the beer and food we only had the energy to do one thing – take the subway back and nap!

A long nap later and with more food in our stomachs we went to The City Tap House. This place was also close to the U of Penn and was located about two stories up on a large building. It had a nice outdoor area with some benches, tables, lots of standing room. Happily, they lived up to their name – they had a lot of beer on tap, along with a full bar. We sampled several different types and were pretty happy with them all. As an extra bonus we got to see some reallllllly drunk people that reminded us of the Jersey Shore folks doing some crazy dancing (yes, including “the worm”) near the entryway. One of them managed to walk into the plate glass window separating the inside from the outdoor area – all in all, a good place for some great beers. The downside the the City Tap House was the service. It was slow. Really, really slow. There were no waiters out and about to take orders so you had to go to the bar. No problem with that, except that it would take 10 or 15 minutes to get a drink! That seemed a little excessive, but wouldn’t stop me from going back the next time I’m in town.

Last, but certainly not least, we grabbed lunch on the way out of town Sunday. This was the way to end the trip. A good Mexican themed restaurant in the downtown area with really fresh food, awesome guacamole, and great tacos. An added bonus was the selection of tasty drinks. I made the choice to get a gauva mojito, which seriously made me transport to Hawaii momentarily, and Jeney got an awesome margarita. If you’re around the area, stop in at El Vez (I believe there is a “sister” restaurant located somewhere else in the city as well, “El Rey”). Those were the best drinks and pork tacos I’d had in quite some time – I see a return visit when I’m in town next!

What to do next time?

Explore more of the downtown areas and visit some of the historical areas. I apparently ran down the stairs from the Rocky movie while thinking that I had missed them…I’ll need to go for another run by the Art Museum so that I can run UP the stairs properly! Also – it felt good to be back in a city again. It was a little clusterphobic at times, but even writing this post up I feel like I’m leaving so much out; there is just so much to do and see in a big city. I’m really looking forward to going back to Seattle sometime with “fresh” eyes.