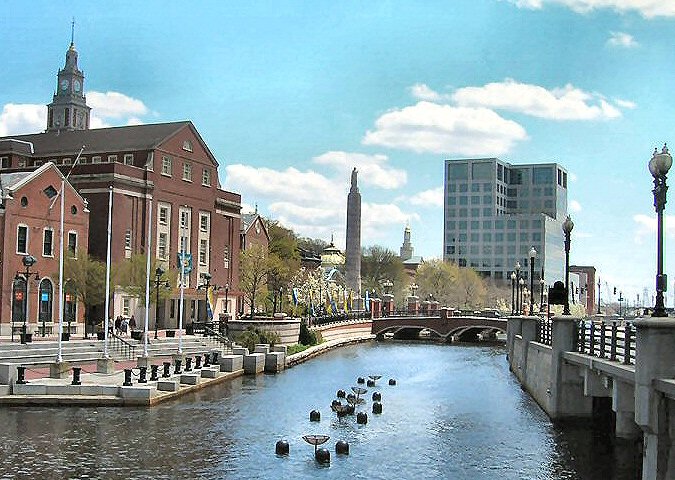 Let’s start things off with a bang! For the first race of 2013, I came in 3rd overall (and 3rd in the men’s “division”) while Jeney took things up a notch and came in 1st in the women’s!

Ok, now to bring this back down to reality – we did do a race, but it wasn’t exactly super competitive. We are currently in Providence, RI, for the SVC convention and signed up for the 5k fun run/walk. So we had a field of competition that included about 40 or 50 people total!

That said, it was still good to get out and run a race this year; it’s always interesting to me how much more competitive I get when I can hear the footsteps behind me! 5k’s aren’t really my strong point, but I like them for a bit of a “cross training” opportunity and a good way to get a high intensity workout in. I’m still partial to longer runs with a bit of a lower pace.

Providence as a city has proven to be interesting so far. As expected for a larger city the food selection has been great. We’ve already hit

up several local eateries and had pretty good results at all (some outstanding flat bread pizza at Bob & Timmy’s). Jeney did some research prior to us heading out here, specifically on Reddit, and came up with a great list of places to eat – we are going to have our plates full trying to get to even a small fraction of them.

The downtown area, near the Biltmore, has a good variety of entertainment and food choices within easy walking distance. In about 5-8 minutes we can be in a different area of the city by foot and could probably cover the proper downtown area in 15 minutes or so. This makes it really nice for getting around easily and being able to see a lot of the city in one visit.

The architecture has also been impressive – coming from the west coast it is always interesting to go to the larger eastern cities and see the large shift in styles that came from the years past. Yesterday we went for a 45 minute walk that encompassed the financial downtown district, the “old” College Hill area (homes from late 1700’s & early 1800’s), around to Thayer St (known for shops, food, etc), strolled through Brown University, and finished things up at a local brewery that makes a damn good IPA.

I could see Providence being not very interesting or fun during the middle of the winter, but if you are around during times when you can at least walk from place to place, it’s worth the stop. This week has been in the 40’s and 50’s during the day and with a jacket it hasn’t been too bad. I’m not sure that we’ll head back here specifically, but if we’re in the area we would certainly stop and grab some good food and beers. I’ve heard that they have barges they light on fire on certain spring evenings…that might be worth seeing some time!