This year for the 4th of July we started things out a little differently! After getting up at 4 am, we hopping in the car and drove about 30 miles west for the Finger Lakes Fifties – we were signed up for the 50k.

As you can see below, we had a bit of rain that morning… 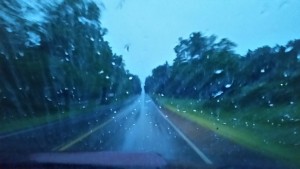 However, once we got parked and were walking in to the registration area it had pretty much reduced itself to a light drizzle and the temperature was a nice 55F or so. 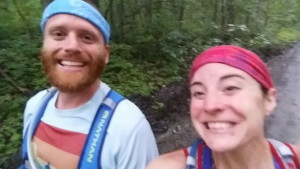 The race probably had 200 or so people starting at 6 am (50k and 50 mile racers) and we all started out together. We quickly turned off the camping road onto trails which were mostly consisting of mud – this was to be the theme for the day!

I can now say that THIS was the muddiest race I have ever run – with the trails being multi-use (horses, etc), the rain before and during the race, and the large number of runners, this course became a mud pit in sections!

After a few years in upstate NY I’ve gotten more used to this, but even I was surprised at the amount of mud and super slippery sections. That said, this was a really good race with great support – I would definitely do it again and look forward to checking it out next year.

After the first lap was done, Jeney made the smart decision to stop at 25k due to issues with her feet and toes stemming from her Manitou’s Revenge run a couple weeks prior – better to stop early and not risk serious complications! I was pretty proud of her as this isn’t an easy thing for anyone, especially her, to do in the middle of a race.

I was feeling OK so I continued on. After stopping to wash out my shoes I kept a decent pace until I hit about 20 miles and just crashed a bit – naseua, fatigue, etc. 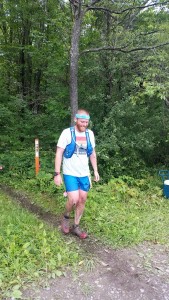 Luckily I had been eating and drinking prior to this and was able to slow down my pace a bit and just keep going. Jeney helped out by surprising me at around mile 25 as I was coming out of the woods and getting ready to head into the cow pastures which really gave me a boost and was the turning point for the rest of the run.

With 6 miles to go it was much easier to keep a steady pace and enjoy the remaining time. The sun had come out and it was a beautiful day – still muddy and slow, but a great day to be in the Finger Lakes!

This, my first trail 50k ended up taking me just over 7 hours and was a great way to kick off my “real” running season for 2015. After rehabbing my legs/knee/hip from serious IT Band issues this spring it was a great feeling to finish this race without any pain or issues with my knee – hooray!

Next up – Colorado and the Trans Rockies Run 6!