For the past few months, I’ve gotten seasoned to the “bang-bang” of the weekend runs thanks to Manitou’s Revenge. Big run on Saturday – BANG! Another big run on Sunday – BANG!

Our plan this last weekend was simple: try to get Adam to do about 30 miles.

We started with a “quick” 18 mile run through Abbott’s Loop and Danby State Forest. The loop was as we love it: full of hills and mud. The clouds rolled in, and thunder became the ominous soundtrack for the last 4 miles of the loop. It only rained for the last mile or so, but it was a very quick downpour! We were joined at the end of the loop by our friend, Amy. This was her first “real” trail run, and we headed out for another 9ish miles on the Finger Lakes trail, hoping to not scare her away from trails (she lost her shoe only once in the mud). It was a good day, but we were a little apprehensive about running in the Forest Frolic 15K on Sunday. 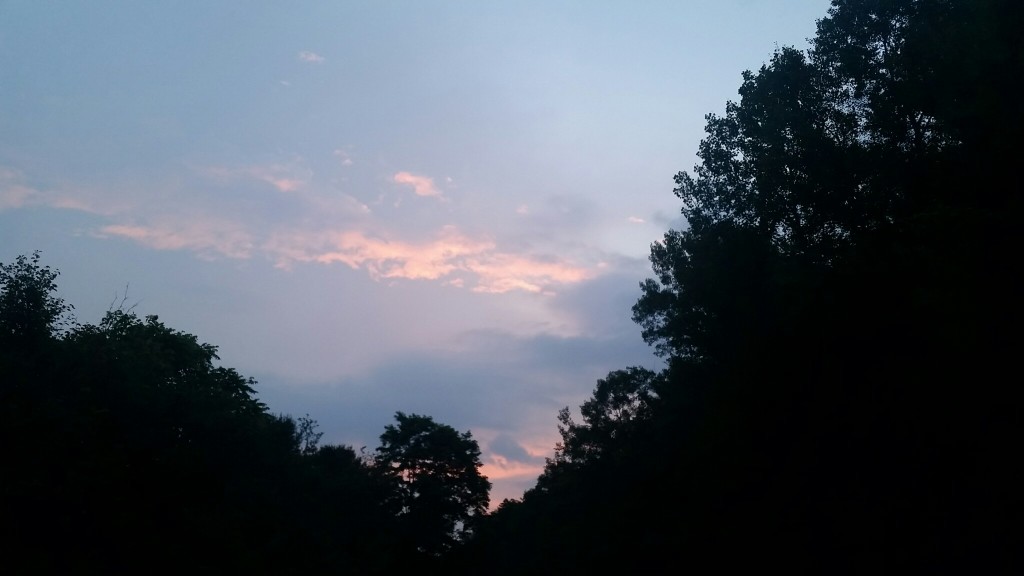 On Sunday morning, we woke to beautiful clear skies and rejuvenated legs. We both agreed to “take it easy” and “consider this a training run”. Yeah. Right.

Bang! We were off! The first section was downhill; I remember Adam saying something like “I won’t take this at a 6 minute per mile pace like I did last time.” Sure pal! But he did and so I was shocked when he showed up right beside me when it leveled out and the path widened. For the next bit he ran right behind me, chugging up the first mile of uphill. Here, the course splits; the 15K-ers have a choice of running the course clockwise or counter-clockwise. If you run it counter-clockwise, you continue up the steep hill for another few MILES, roll over a few quick forest trails and end up out in the sun to the summit, going uphill (again) in the open next to powerlines. If, on the other hand, you run it clockwise, you turn off the trail and head into the forest, where you gradually wind your way up to the summit amid the trees. Eventually you pass people going the other way, and when the trails join back together, you head off for another 7K with only one big-ish climb.

I pushed HARD the first third. The forest was cool, but the humidity carried the heat of the morning into the shade. I followed a group of runners, and they pulled me quite a bit up the hills. Towards the summit, they started to show the effect of the elevation, but I still had my Manitou’s pain-threshold, so I powered past and trudged upwards. Near the top, I passed Adam going the other way, gave him a high-five and reflected on how quick he must’ve been running it. The mud had slowed me down going uphill, and the constant rolling upwards had put a large dent in my energy stores. I hadn’t seen anyone in front of me for the last section, so I figured I was slowing. I waited for someone to pass me…

I blew across the summit and straight into the broiler of open trail. No shade. Pure sun. Considering my course took me downhill, I shouldn’t be complaining, but it was still oh-so-hot. I didn’t envy Adam who had to muck his way up…So I let my legs loose and increased my stride, feeling the almost-breeze I created for myself (hah). I opted out of the aid station, and headed back into the forest. The little climb here had me! I realized I was probably taking this too quick, and was burning energy too fast. I started walking hills I had been running earlier. And I still waited for someone to pass me…

But no one came, and I was on my own. The trail eventually led back onto that steep logging road of runner’s defeat, except for me went downhill. This is what demolished runners in the other direction (and why I turned and went clockwise in the first place). I was running so fast, I was nearing the boundary of being out of control. I let my heart rate dictate pace, and allowed gravity to pull me down the hill. I must’ve looked insane. Arms flailing, hair flying wildly about my head, feet bouncing from one side of the trail to the other, and my exclamations of surprise, joy and fear (I can’t quietly run, ask anyone). I think I make sound effects for every trip, slide and misstep…

Once I reached the meetup with 7K to go, I saw Pete, a recent friend from trail running. He was about a tenth of a mile in front of me, and now I had my carrot. I needed to catch him. The trails settled into light ups and downs, but eventually went up the big-ish climb to a Rock Pile. The climb is steep and long, and I walked nearly the entirety. So did Pete, and we chatted a bit as I slowly drew him in.  Once over the top and for the next few miles, I would catch him, pass him on uphills, and then wait for him to catch me on the flats and pass me.

We do-si-do’d for a few miles, and as we neared the finish, I shouted over my shoulder that he had to catch me or else. We sped up, ignoring the weights in our legs; slowly ratcheting the pace up.

I have to say, I don’t think I’ve run that fast in years. Pete and  I matched each other until the very end, and I can’t even imagine where that energy came from. And why I didn’t have that for the last few climbs…

What came next surprised me even more – Mr. “I’m going to run this easy and just see how my legs do” flys into the finish in the top 15! He looked strong and happy and I’m sure he’ll comment on here about how he liked the trails.

Overall, I’m very proud of how Adam ran, and excited to see how my legs could stand up to the “bang-bang”. I’m even ok with not quite hitting 30 miles (but we got close!). This bodes very well for the TransRockies Run6 in August. Colorado…here we come!

As a side note, I ran in my toe shoes the whole weekend and LOVED it. My feet and toes felt 100% the entire time. Looks like I’ll be returning to my toe shoes for good…muahahahaha!