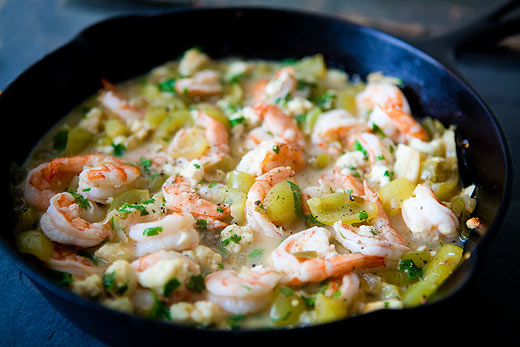 This past weekend I had the opportunity to cook a dish that I hadn’t made for the better part of a year. Last fall, I tried making it for the first time and really liked it. It combines seafood, fresh veggies, and cheese – what’s not to love about it?!?

I had also never used tomatillos before and found them to be very tasty. Preparing them is interesting; they are certainly like tomatoes, but after peeling the paper-like skin off they leave a sticky residue on the fingers.

The recipe and prep is simple and only requires one pot (oven safe). It can be prepped and made in less than 45 minutes and keeps resonably well in the fridge for a couple of days.

I like to add a bit of kick to it with either a little cayenne pepper or some diced up jalepenos with the seeds removed (2 or 3). The amount listed here will serve 4 – although it won’t be a huge amount. If you have a hungry crowd of 4 you might want to toss in more onions and tomatillos.

Add the cheese and shrimp to the pot and mix. Cook in a preheated oven at 425F for 10 minutes.

Remove from oven. Sprinkle lime juice over the top and add black pepper to taste. Add cilantro. Stir before serving.