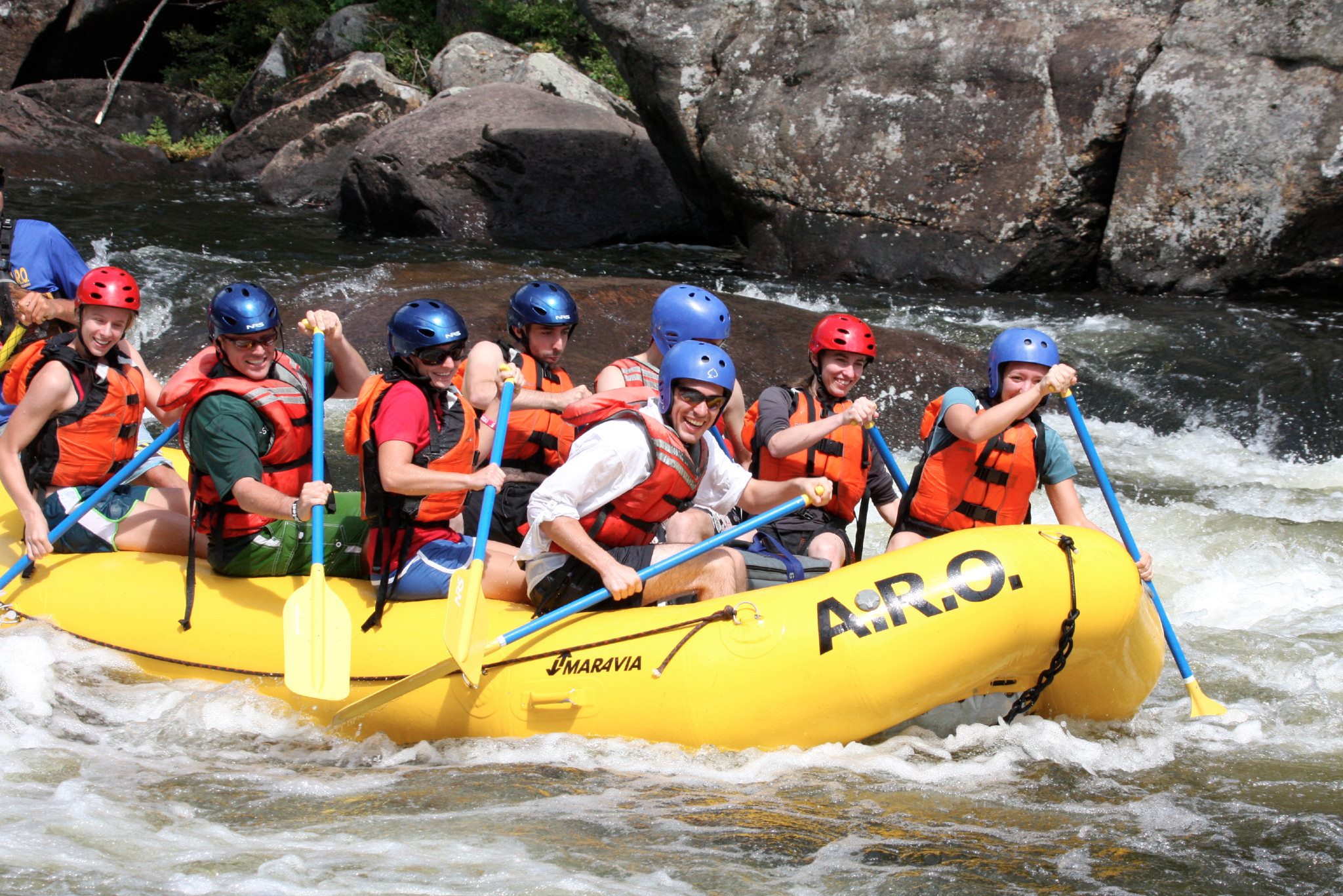 This past weekend we headed up to the northeast of Ithaca a few hours to spend a night at the Lewey Lake campground, near Speculator, NY, which we followed up with a day of white water rafting down the Indian and Hudson rivers in the beautiful Adirondacks.

Both Jeney and I have been rafting in various places before (Washington, Oregon, Colorado) and were looking for a good excuse to do some rafting before the summer was over. Luckily, Jeney came across a great Groupon a month or two ago and alerted us – fast forward several weeks and we had a group of 8 people ready to drive a few hours, camp out, and do some rafting!

Initially the trip out of Ithaca was fairly routine as it took us around Syracuse and in the direction of Utica – roads we had traveled before. However, we turned north near Rome, NY, and continued our slow ascent into the Adirondacks. At first it was a bit underwhelming, but the several hours in the car was worth it. After a conspicuous lack of what we would call “mountains” we came around a bend in the road and were treated to rows of tree covered mountains and lake after lake!

It really is a gorgeous area, we intend to go back up once all of the sight seers are out of the area in the early fall and rent a cabin with some friends for a full weekend. For this trip we headed to Lewey Lake, near Speculator, NY, and set up shop at our two campsites. Jeney prepared her outstanding

In the morning I cooked up some (ok, about 2 pounds) of bacon and a few eggs – everyone tossed their gear into the cars and we were off for the rafting.

Adirondack River Outfitters was a pretty good operation – we showed up, checked in, and had our gear (helmet, vest, and paddle) in about 15 minutes. After everyone had checked in we had a good safety brief that explained the basics (just what exactly we were doing, how to “not panic” if you find yourself outside of the raft) and explained the day. Shortly after that we loaded up into their bus and headed out for the quick drive to the area where we put in.

The river is so low during the summer that they do a planned release from a dammed lake – they leave this open for a few hours and you ride this “bubble” down the river. Without this the river would be too low in some areas to let the rafts pass.

Them morning was fairly tame, with a few small rapid sets – the sun was shining and our guide was really friendly; two very important ingredients for good rafting! We stopped after a couple of hours for a quick bite to eat. After hopping back into the rafts we hit several more rapids and had a lot of fun hopping out and swimming during the slower sections (and tipping the raft, hitting some rocks, and spinning it around to see who could stand up the longest without falling out). After most of the rapids were over we still had a couple hours left and took advantage of the slow time to ditch the safety gear and lay out on the raft. Our guide kept us on a safe path and let us know if there were any bumps coming up – a great way to spend the afternoon!

We wrapped up the trip back at the ARO facility; after pulling the raft out and putting up our safety gear we were treated to some BBQ’d chicken and a lot of good sides and….most importantly….beer!

This was a great first rafting trip in the Adirondacks and we’re looking forward to coming back in the spring when the water levels are a little higher and the rapids a little bumpier. ARO was a great company to go with, I highly recommend them!