Down South For 2014 Ragnar Trail Atlanta

Earlier this year we decided that trying a trail Ragnar was near the top of our list for events we wanted to do this year. Luckily, our friend Kaleigh felt the same – although I think a large part of it was her obsession with completing races in all 50 states, and Georgia had not been crossed off of her list yet.

Signing up for this race, renting a van, and driving 16 hours south turned out to be the one of the best decisions we have made! That in itself sums up how good this event went. Driving 16 hours each way is rough no matter what – and we actually had a pretty good time!

The setup for Ragnar trail events seems to be a large open area for camping that is situated next to the “event” area – a single chute is the start and finish of every loop in the relay. Around this was a fire pit, eating area, and the usual sponsor booths and freebie stands.

We we arrived on Thursday night at about 9pm the camping area was maybe 20% full. We had a choice of spots and there was really no set layout – there were solar lights for a main path to and from the start/finish that went through the camping area, but other than that it was open.

We picked a spot that looked like it might not be a depression (rain was predicted) and hastily put up our camp. There are a few things that I thought really made our campsite work well: 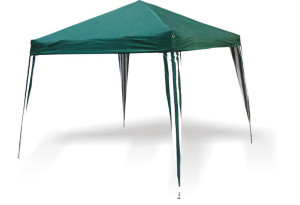 I generally don’t go in for the bells and whistles when “camping” but this turned out to be an awesome addition. It gave us some protection from the sun (and rain), helped define our space, and was a central location for everyone to gather in their camping chairs for food and to just hangout.

We stuck the table along one side of the pavilion and that worked well as a cooking area / storage space / person blocker (people were oddly trying to walk through our campsite in broad daylight…).

The other two items – chairs and LED lights just made it nicer. After a run it was great to have a chair to sit and relax in instead of having to stand or lay down (sleeping bag). The lights were nice at night and made our area very visible and easy to identify while not being overpowering.

The last thing we did that worked out really well was having one large tent for sleeping (we only had 6 people on our team which helped with space), and a smaller tent for gear, smelly clothes, and changing. 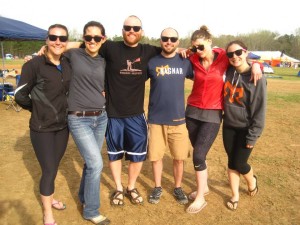 The trails were very different from each other and had some character – being a team of six meant we each ran one extra leg for a total of 4. It turns out that trail running 20-ish miles over about 18 hours really works your core!

Marking of the trails was pretty good – although if you had never run on a trail before it might have been a bit confusing at night – there were some sections where you were out of sight of markers for a minute or two at a time.

I won’t bore anyone with intricate trail discussions – it was fun, tough, and interesting to run many trails in a row, especially at night.

We ended up finishing after around 21 hours. We caught up with our final runner just before the finish line and passed out beers – finishing as a team while enjoying some cold beer in the 75 degree Georgia sun – a great ending to a really fun relay. 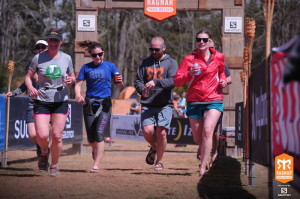 Even better? Kaleigh’s family made the trip down from various locations and we got to hang out with them while playing cornhole, drinking beers, and relaxing after the race. Once we had packed up and headed for the hotel it was out to dinner, a few more beers, and then a quick night’s rest before rising at 4:30am to make the trek back north to Ithaca…