We closed on our house and got the keys yesterday! Hooray for us! We’re looking forward to a great summer at the new place – but we have got some work to do! The pool is pretty disgusting – it is really, really, really dirty. 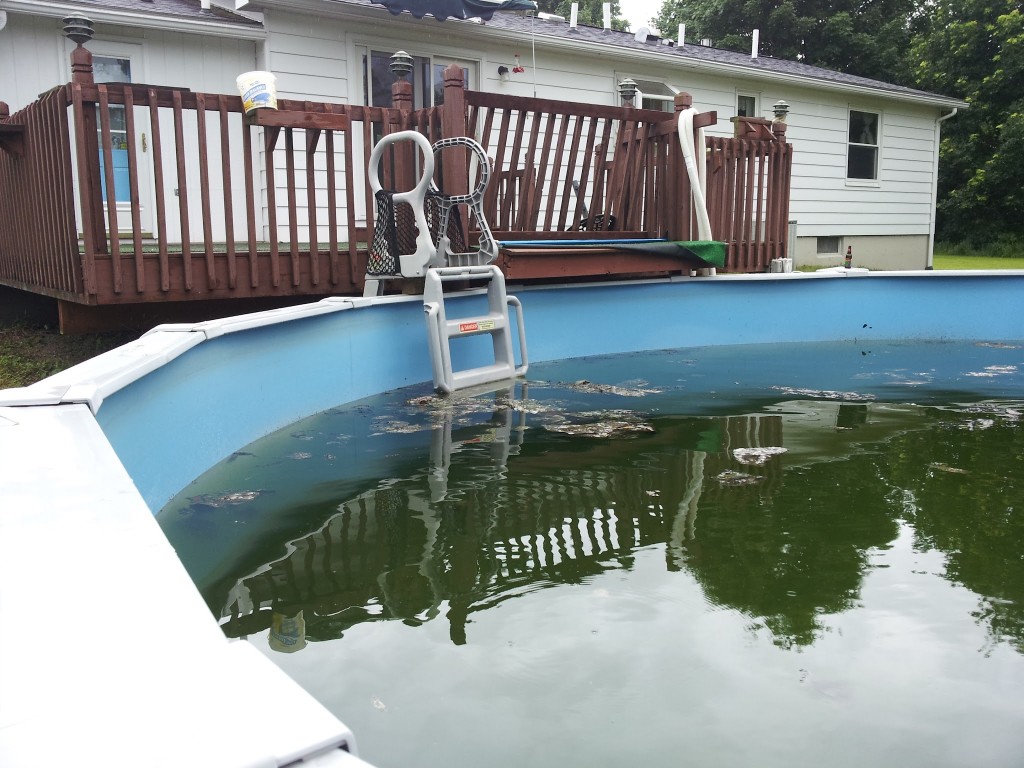 Cleaning this pool is going to take some work!

I pulled the cover off the top and discovered our “green lagoon” underneath. That wouldn’t have been so bad – I was expecting a ton of leaves and other organic debris, but instead I found a ton of what looks like decaying plastic. This seemed a little odd to me, especially since the cover is made of plastic as well. I’m guessing this was some cheaper bubble wrap type stuff that the previous owners threw down underneath the actual pool cover for added insulation. The chlorine and UV probably affected this more than the actual pool cover and has given it the odd colors and slimy kind of texture…

So, a few hours of mucking that stuff off of the surface and I now have a fairly green looking pool. After one of our friends took a $40 bet and jumped in, I’m going to see if I can get it to be just a tad bit cleaner.

After looking around online and doing some reading, it seems like you are supposed to kill off the algae and other debris with a few simple steps. Simple, but labor and time intensive.

After it gets to be reasonably not-green, or we give up in utter despair, we’re going to take a sample in to the local pool shop and have them tell us where to go from there. Here’s to hoping it doesn’t go on for several weeks – we have a pool party to plan!

Update 6.15.2012: After dumping in some household bleach a couple of days ago and continuing to scrub and toss out muck that floats to the top once a day the pool is starting to look better. It is still far from being swimming ready, but it appears to be moving the right direction! Today or tomorrow I plan on filling the water over the outlet (to the pumps) and giving the pump system a try. Fingers crossed! 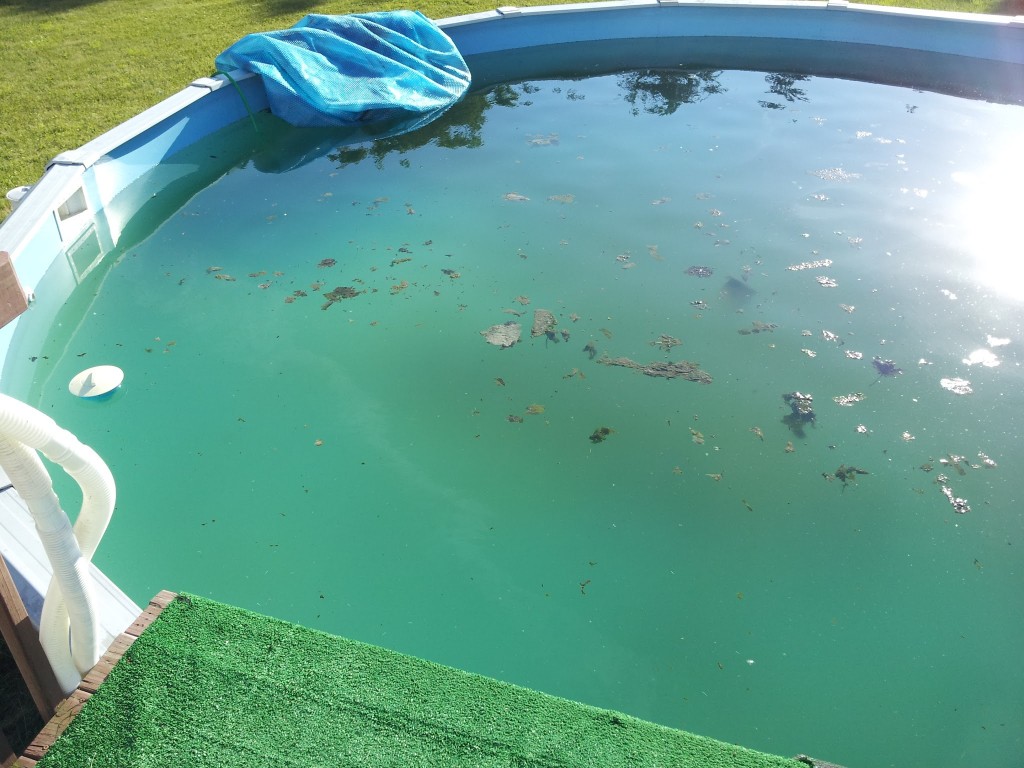 Above Ground Pool Getting Cleaner

Update 6.19.2012: Yesterday I went to a local pool supply company (Tarson Pool Supply) in Cortland, NY and took along a sample of our water. I also told them about “small” leaks that we were seeing on the bottom of the filter and the top of the pump. They were really helpful and got me some new gaskets, caps, and some sealing lubricant for the pump cover. Jeney ended up having to use the old and new ring on the pump cover in order to get it to seal completely.

With that stuff out of the way we proceeded to hook up the vacuum and start cleaning the bottom (really wish we would have sprung for a “robot” pool vacuum…it would have saved so much time!) – this turned out to be more of a pain that we thought it would be. There was so much stuff on the bottom that while I was vacuuming Jeney would have to pull the end out of the filter on the drain and empty out the basket…and she had to do this about every minute! We did this for about half an hour and made some good progress before I got cold and decided to call it a day.

We then started with 12 (yes, TWELVE!) pounds of pool neutralizer – the bleach I had added in the beginning had slightly altered the pH of the pool. Additionally we put in 2 pounds of an anti-algae chemical. We let that get mixed into the pool with the pump running and returned after dusk to add in 2 gallons of pool shock. Basically, pool shock is used to “shock” the pool at the beginning of the season or when it is getting out of whack with organics that may irritate human skin and tie up chlorine that would otherwise be keeping the pool “clean”. The good news? It looked a lot more like a pool this morning when we went to see how it was doing! I think we are getting close to having something that we would actually swim in – hooray! 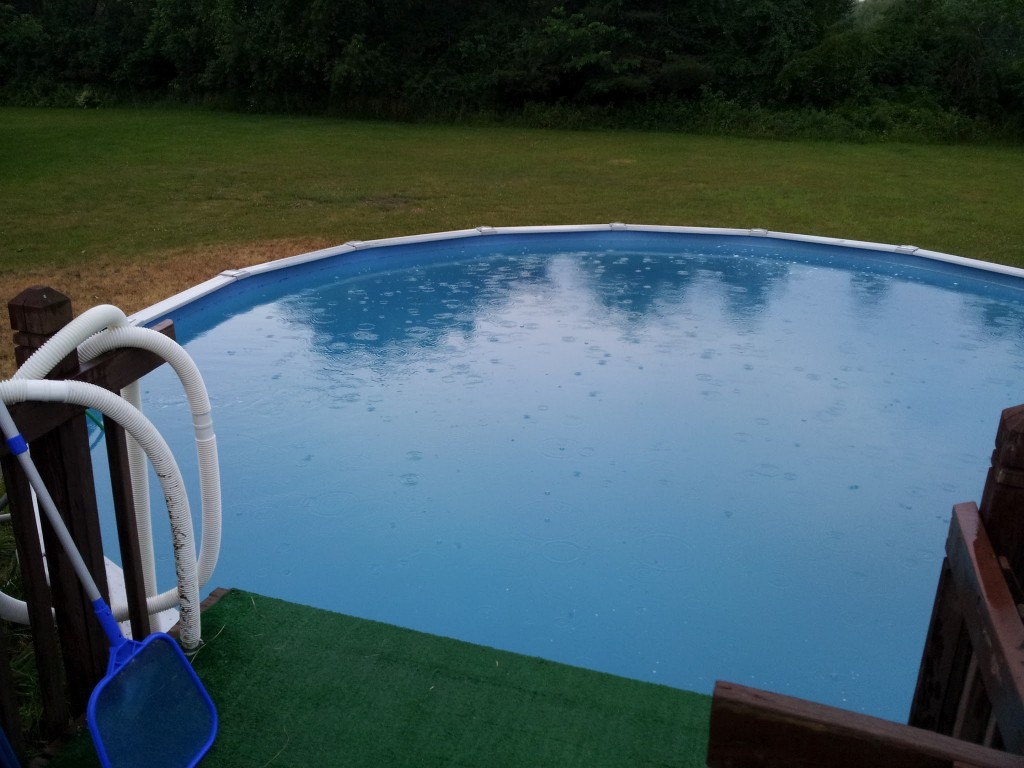 A little rain and thunder this morning, but that didn’t stop me from being happy that the pool is starting to look good!

Update 6.24.2012: I took another water sample in to the pool company and was told that we needed to “shock” the pool again, with even more chlorine, and that we needed some other chemicals to increase the water hardness as well to prevent algae growth. In total, we have now added the following to our 10,000 gallon aboveground pool:

The good news? I can see the bottom of the pool!!! The pool is now starting to actually, really, finally, look like a swimmable pool! From what I’ve seen and after talking to the lady at the pool store the pool should be ready to go in a week or less.

It has taken a lot of manual scooping and cleaning, but it sure has paid off fairly quickly. The last part will be continuing the vacuuming – now that I can see the bottom this will be a bit easier. The issue with vacuuming is that the filter gets “full” very quickly due to the small intake size; one or two leaves and it is basically done. Then you have to go over to the filter, pull the vacuum hose out, clear the junk out of the filter, and then start again. As time goes on this will get easier, but with the amount of crud in the pool when we started it has taken a lot of time. The payoff here will be having a pool that is useable for the 4th of July and our Beerlympics! 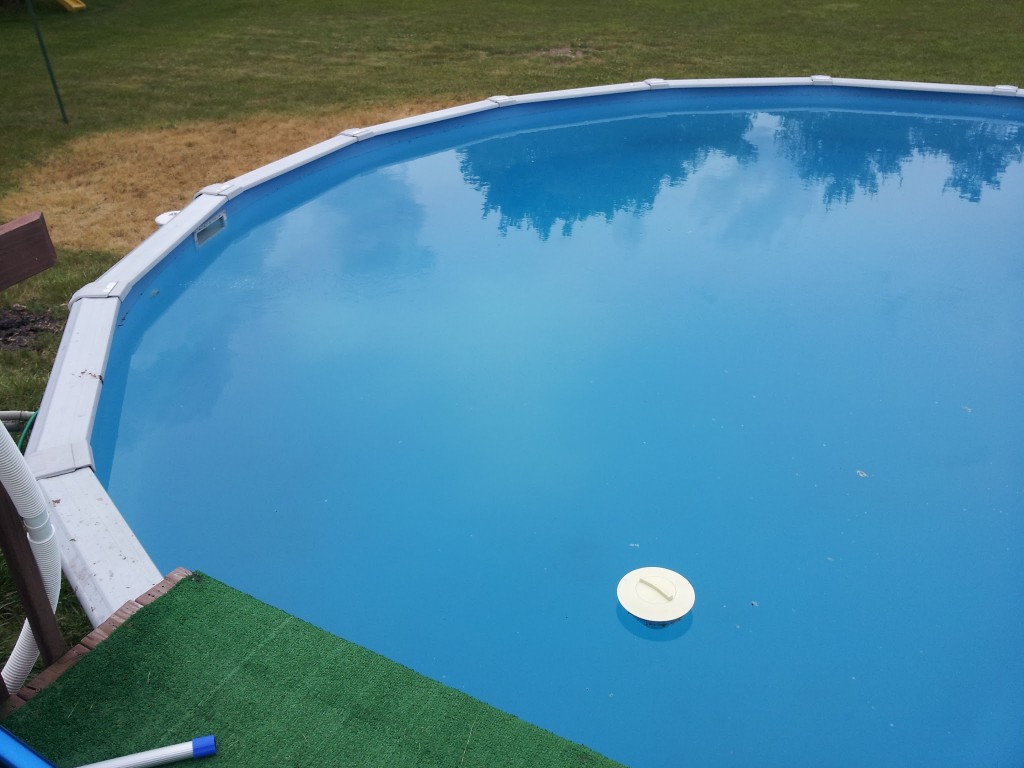 Our aboveground pool is almost clean!