This past weekend we went over one lake to Watkins Glen to run the Catharine Valley Half marathon with a few friends.

This was a “last minute” plan as our marathon training guide called for a half marathon – we looked around and found this one and decided to sign up. It turned out to be a good decision; the weather was great for a summer race, it was nice and cool (high 50’s at the start) and the course was fairly flat. It did have a low grade incline for a few miles but that was paid off on the return trip – it was a fast course!

The route starts off at a local high school and follows a jogging/bike path. It is mostly the really small gravel with smaller sections of flat packed dirt and a few road crossings (complete with volunteers and police). Although the port-o-potty siutation was a little lacking (what race isn’t?!?) this half marathon seemed well organized and was a lot of fun for a smaller race. There were about 350 people running and it covered the entire gamut of runners – the local girls cross country team was there and we ended up talking to a small group that runs ultra marathons and does Ironman triathlons too!

I chatted with a few people on the way up to the turn around point and was able to maintain a good pace due to the low incline. After the half way point I was able to crank up the speed and get a few miles of sub 7 minute pace in while heading “down hill” and running with a small group of runners.

Jeney was never far behind, I’m beginning to hear those little footsteps behind me at the races! Although I felt like I ran out of gas around the 11 mile mark, I finished up with an average pace of 7:20 per mile, and Jeney was just about a minute behind me with a 7:25 per mile pace!

After stretching out and enjoying some of the post race food (hot pizza!) we headed over to the Rooster Fish breweryfor some refreshing adult beverages and more food. Sadly, the 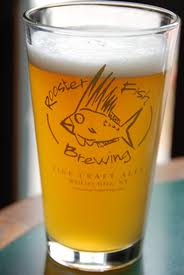 Great beer – not so great service

service at the brewery hasn’t gotten any better (the site of one of our worst restaurant experiences ever – look the place up on Yelp for my review sometime…) but the beer they make is so good! I highly recommend the Hop Warrior IPA, but maybe pick some up at a nearby store – they charge $7.50 a pint at the brewery.

If you are in the area and looking for a fairly flat course for a half marathon you should check this one out – friendly people and the smaller size made this a good choice for a training run.