May 11th and 12th was the inaugural Cape Cod Ragnar Relay  – and we were there! Adam was the team captain of the 11 person team “Sudo Run Faster” in the mixed open division. Adam had previously done the Northwest Passage Ragnar (northern Washington state) while the rest of the team were newbies.

There were tons of people in this race – 365 teams in total, with 4 to 12 people each. It seemed fairly crowded at the exchanges, although the Cape Cod Ragnar Facebook page said that the race was only at 85% capacity. I would say that they might want to lower the total number of teams in the future – just my opinion, but some of the exchanges were overcrowded and the volunteers were visibly frustrated and confused, especially in the beginning. That said, the race went off without any traffic or race confusion related injuries – no small feat given that you have sleep deprived people driving around a race course in the middle of the night!

We had a great time, even though we had lots of driving to do – about 6.5 hours on the way there, and 7.5 hours on the way back. The course takes place mostly on the Cape and is fairly flat. Given that our next Ragnar will be the Adirondacks Ragnar we were happy to have some really flat (and fast!) sections.

As always, what you bring with you can make or break you during the race. Try forgetting to bring some toilet paper and then being at an exchange needing to go to the bathroom before you run only to find out they have no toilet paper left in the porta-potties! Not fun. Getting the basics packed up for the race can be important; of course the list will vary from person to person, but we’ve found that a good amount of spare running clothes (shirts, socks, etc) and clean clothes for after the race can make a huge difference. Also, finding a place to shower off after the race is something that we try to figure out ahead of time. For this race it was even more important given that we had a 7.5 hour drive back home.

One quick note on eating during a race. Eating pizza sounded great at the time. And the fries with cheese and bacon sounded delicious (and tasted great too!). However, a happy stomach this food does not make! Add to that a little bit of heartburn. Now, I know better than to do this during a race and should chalk it up to a little mid-race-giddiness. I don’t think I will be repeating this exercise in food endurance for the next relay! Actually, we need to get a list of food that we know we can handle in case we end up doing the Adirondacks Ragnar. I suspect it will mostly be our usual pre-run food: bananas, yogurt, bread, and some other much lighter foods.

There was some great scenery to be had – especially on Saturday morning as Van 2 started to get out towards the end of the Cape. We had several exchanges at or near beaches – the picture below is both of us at about 7:30 am as we waited for our first runner in the van to come in after a 6 mile run. 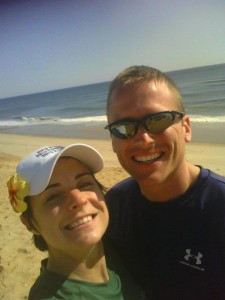 Only 4 months until the Adirondacks Ragnar!