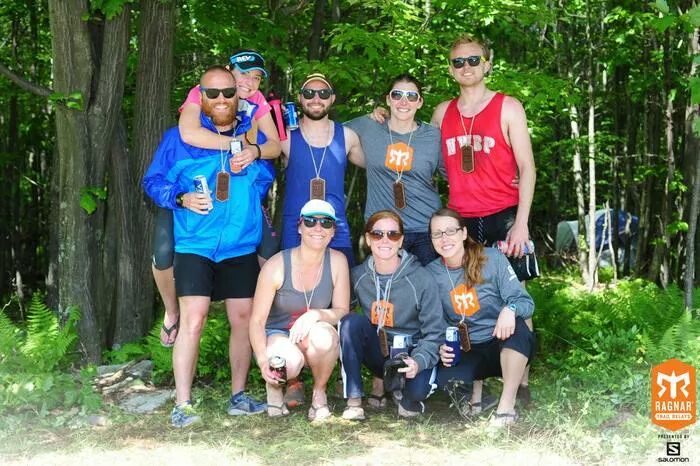 In mid June, 2014, we headed down south for one of the closer Ragnars. This was our second trail Ragnar and it took place in West Virginia – a short 6-ish hour drive for us!

It was a nice change of pace not having to rent cars or vans; we ended up taking our two cars down and meeting a friend from New York and two others from South Carolina – they had the long drive this time.

Well, this one got interesting. We got a taste of the weather on the drive down when it started pouring buckets about 1.5 hours out from the camping area where we were going to be running.

Once we got into the area and set up things seemed to be going well…Too good to be true!

Once the race started the next day, we were really enjoying the routes which were green, had a lot of variation (hello Red loop!) and some decent elevation. However, things took a turn in the evening when the winds picked up in about 60 seconds and the rain came pouring down. Tents starting going down (or sideways) immediately, and several people lost their temporary shelters! We escaped with only a broken spar on our shelter and a tent that had a decent leak in the side. So, we basically became damp for the next 24 hours with standing water throughout most of the camping area 🙁

That said, it could have been much worse!

We spent the next 12-16 hours a bit cool and wet, but the sun eventually peeked out the next morning and we finished off the WV trail Ragnar in dry conditions.

After bombing over to Morgantown, WV, and getting cleaned up at our hotel we headed out for some pizza and beer – and then staggered over to a bar where Jeney and I realized we were putting 99% of our energy into staying awake and 1% into paying attention to conversation – time to hit the rack!

It was a good trail race, but the setup was a bit odd. It is very “long”, maybe 1/2 to 3/4 of a mile deep (where you can camp) and probably 100 yards wide. This wasn’t too bad, but makes for a long walk to the transition for anyone not near the front and once it got rainy it wasn’t much fun. Nothing huge, but kind of a damper. See what I did there?

Our campsite was great, the rain spoiled some of the fun we had planned, but as always we had a good time. Lesson learned – having a dry tent is VERY important (time for scotch guard on our donated 12 person tent).