We started our move on Saturday afternoon this past weekend – we ended up setting a new moving time record for ourselves. We went from first box out the door to last box unloaded at the new place in two hours! That was great and we really owe our friends a big thank you! We didn’t come up against any real issues as Jeney had done a lot of the packing beforehand; dishes and other fragile items were wrapped in newspaper and placed in boxes, everything else was in boxes, bags, or clumped together. The upside of moving 5 miles is that you don’t have to go overboard on the planning, I packed my things the night before and limited even that to making sure loose items were tossed into boxes or bags and generally getting things situated for easy handling.

A few things that we learned from this move: 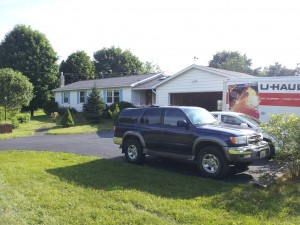 Moving into the new house completed!

After everything was unloaded at the new house we got a bunch of pizzas delivered from a local pizza place (Lansing pizza), which turned out to be pretty good pizza – thin crust, good veggies, and overall very fresh. Their website could use a new picture – in person it actually looks much better! It was delivered a little late, but that isn’t too big of an issue when you have a few cases of beer to keep the friend-movers from rioting. I wouldn’t say that we are able to move for free, but having friends around that are happy to help and “paying them back” with beer and pizza is a hell of a lot better than paying a moving crew, or doing it all yourself, for a number of reasons. Mostly, it’s more fun to hang out with your friends, and it’s a lot cheaper! 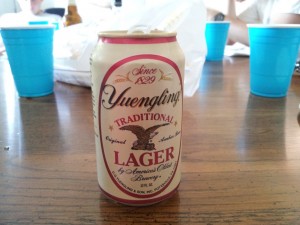 Beer for the movers!

We were pretty happy with the move. No real unexpected issues to deal with and most everything fit into one trip. Of course, we also had the use of everyone’s cars/vans/SUV; that doesn’t hurt when you have 10 or 12 people show up to help. Between their cars, our cars, and a 14 foot U-Haul truck we finished the move and only went back yesterday to grab things that are better moved quickly, mostly fridge and freezer items.