We look forward to throwing a party at our place, and we think we even know how to throw a party pretty well! However, sometimes we can’t pull out all of the stops and go totally overboard on spending. Ok, ok, usually we don’t go totally overboard, but there are certainly times when we want to have a get together but don’t have a lot of spare cash. What to do?

The first item that we usually look at is food and drink. If we were thinking of providing it all ourselves we change it into more of a potluck – everybody brings a dish for tasting and we might take care of the larger main dish. Since we also like beer, and trying new things, we also do this with drinks. We will have everyone bring one of their favorite beers while we provide smaller party cups; everyone gets to try out new beer without paying a ton of money. This generally work out well, however  it could be an issue if you are throwing the party outside in the summer. Bugs might become an issue with all the open bottles and multiple dishes. We generally do this with the food and drinks located inside, near a door, and have the parties outside until we feel like coming in.

Take advantage of printers outside of your home! If you want to get some posters or photos printed out for your party, try and get them done at work or school. I’m not advocating doing anything that can get you in trouble, but if your work or school will let you print out a page or two it can save you in the long run – especially if you can do any large format printing (posters).

We threw a birthday party for a friend last weekend at our place and it worked out great. Everyone brought at least a six pack of their choice of beer, most people brought food to share, and we had a ton of meat to put on the grill. Jeney also cooked up an awesome faux Halibut dish (I’ll let her go into more detail on that one sometime!). In the end, for throwing a party with about 25 people we paid about fifty dollars. Not too bad considering we paid for dishes and utensils (paper/plastic), the fish dish, and six hamburgers. We also ended up with a fridge full of good beer – success! 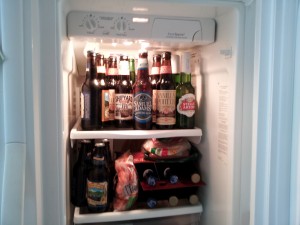 It's ours! All ours! Muwhahaha!

The next time you want to throw a party on the cheap give this a shot – we like to do it often, it also makes the prep and clean up much easier.