One thing that is always something to look forward to in upstate NY is the fall. Once the leaves start changing and the weather cools down – well, it’s just nice!

On October 2nd, Jeney and I drove a few hours east towards Phoenicia, NY, for the inaugural running of the Cat’s Tail Trail Marathon. Once we got near the Catskills the colors exploded, combining the beautiful tree colors with the mountains and blue sky and we were just happy to be in the area!

I’ll fast forward to the next morning when Jeney’s “head cold” had progressed to the point that she didn’t really get any sleep since she kept waking up from so much sinus drainage and felt “like death”. And it was raining. And the temperature had dropped about 15 degrees from the previous morning (it was now in the 40’s).

Jeney made the hard choice to not run and preserve her health while I headed down the road to the waiting buses that would shuttle us to the start line.

Now, for a little background on this area – Jeney had run Manitou’s Revenge just north of Phoenicia in June. However, my knee had been having issues in the spring so I had not yet had a chance to run in the Catskills – today was going to be the first!

So, how was it? It was awesome!

There were no scenic vistas to take in at the top of the peaks as we were basically IN the clouds.

But you know what? It was a total blast. One thing that I really like about running in this area is the people. Both at Manitou’s (as crew) and at this race as a runner everyone was pretty upbeat and really easy going – just a good group of people.

It also probably helps that this isn’t a “first timers” trail marathon – literally. Everyone has some sort of longer distance trail running experience which certainly helped on that day as the course was (in my mind) fairly technical, combining climbs, ledges, running water on the trail, wet log ladders, and steep ascents/descents.

I channeled my inner Seattleite and figured the weather was a benefit; I tend to run hot and it was better than being hot and humid! After getting the big climbs out of the way I thought about how Jeney would tackle the 8 or so miles of mostly down and got after it.

Even though I had a few close calls, the day ended well with a 7 hour finish and no injuries. For the rain and slickness combined with the tough course I call that a raging success!

Would I do it again? You bet! I highly recommend this course to anyone that wants a challenge in a marathon type distance. With the 7,000 feet gain in elevation and the long descent at the end this course is a ton of fun and a challenge.

Jeney met me about 1/10 mile from the finish where she had been cheering people on as they came in: 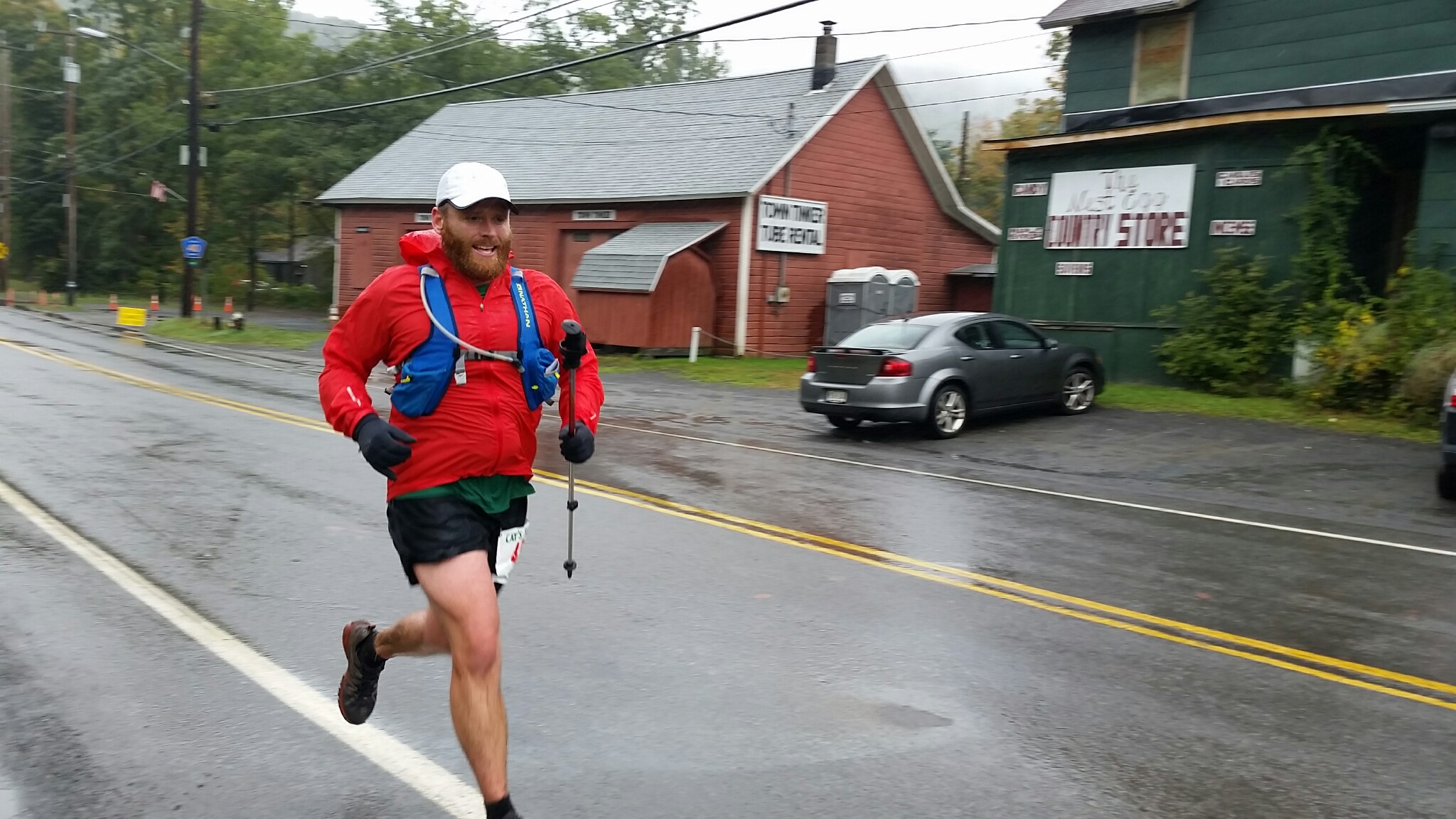 It was great to have her at the finish, along with some great food and a cold beer that we had brought along.

Sadly, we didn’t stay too long as the cold weather wasn’t helping me out after finishing and we still had to take care of our camping gear (and take a cold shower at the campground…that’s another story!).

This is one that we’ll hopefully get to both run next year if we’re still in the area.