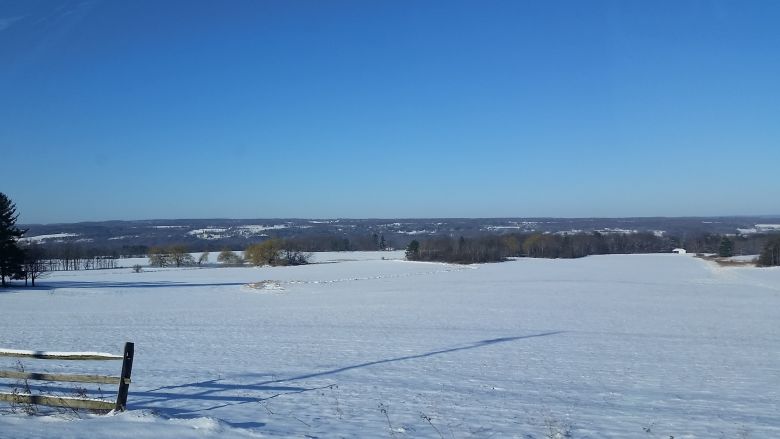 I realize it is already April, but I kid you not, there is still snow on the ground. Thanks, Ithaca, for the “spring weather”. 😛

Here are a few of my cultivated winter shots from the past few years, as requested by Adam (and without, thankfully, the ice beard).

We like to run with friends as this generally boosts morale, we get to spend precious time with the people we care about and it adds some variety to our weekly training runs. Sometimes, we also like to run down the middle of roads (this is not advised, please run against traffic on the shoulder). 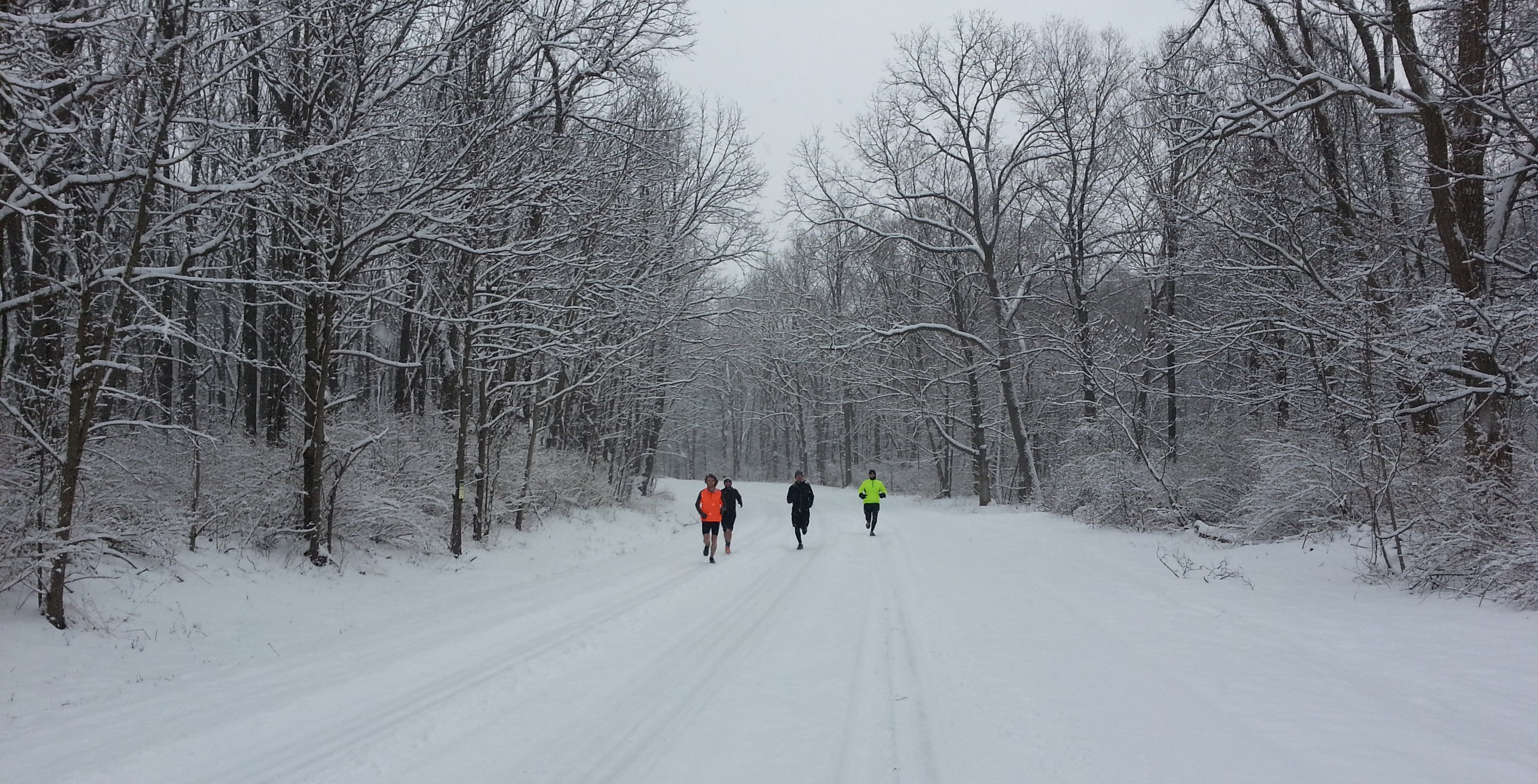 Running with friends when it is freezing and snowing is fun! (psssst – Adam is on the right in the bright green) (January 2014)

We did take a quick trip to the Pacific Northwest for the holidays, and so I submit to you a cheating on Ithaca running photo series from the Columbia Gorge in Washington State. 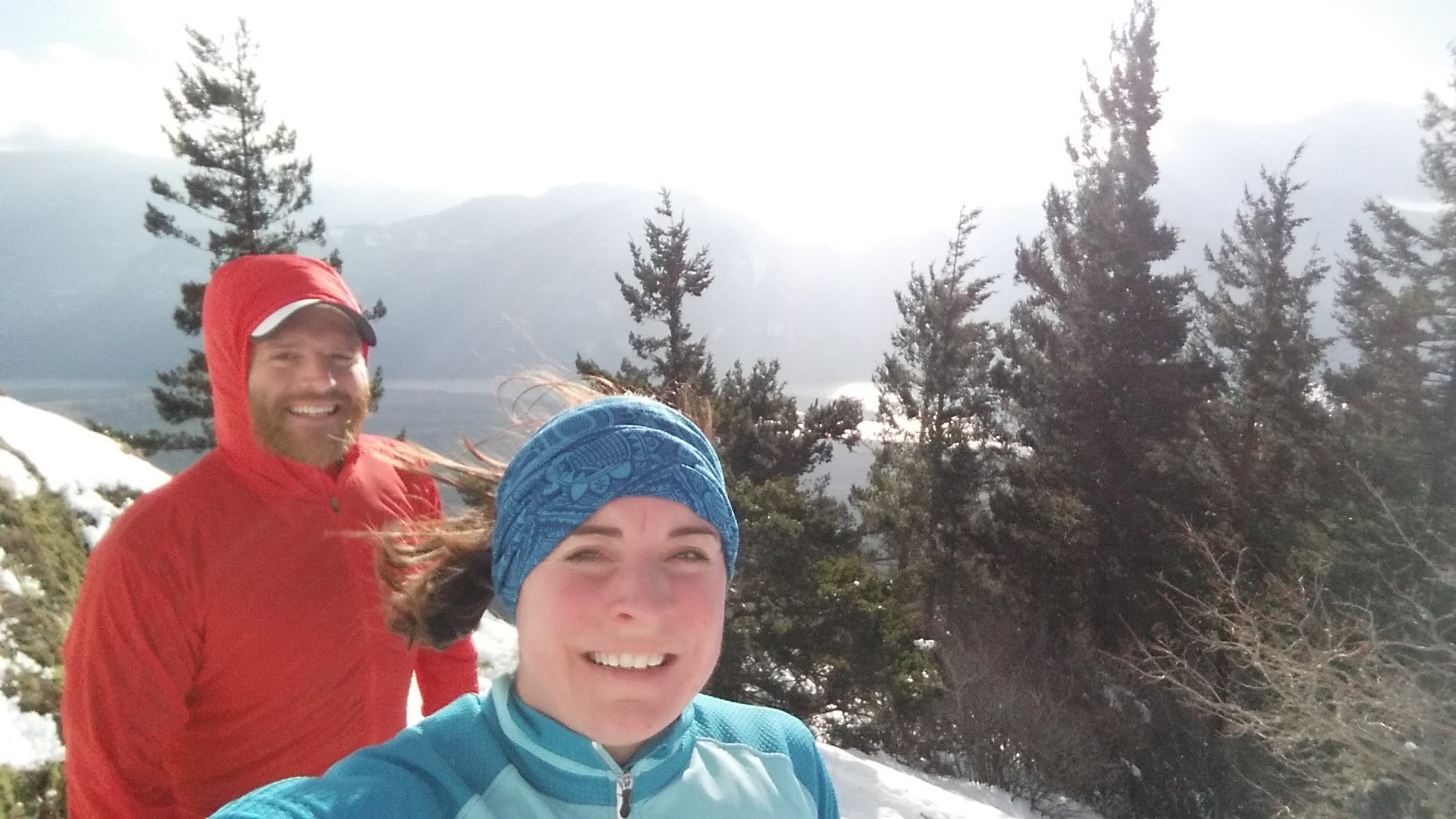 Nearing the top of Hamilton Mountain trail. From here, it was icy and windy and pretty dangerous considering we weren’t wearing nearly the appropriate gear. We turned around soon after this. (January 2016)

The gorge is well known for its windiness and the Hamilton Mountain trail definitely puts you out into some of that icy blast. This hopefully explains the uncomfortable smiles and my wacko hair do…

It is always nice to find new runs in the places we visit. It isn’t so nice when the trail turns into a foot wide ice slide with a cliff on one side. This quickly turned into a slow walk around ice patches and hand-over-hand scaling up icy climbs. Bonus pic of Adam and his creative solution for forgetting his gloves: 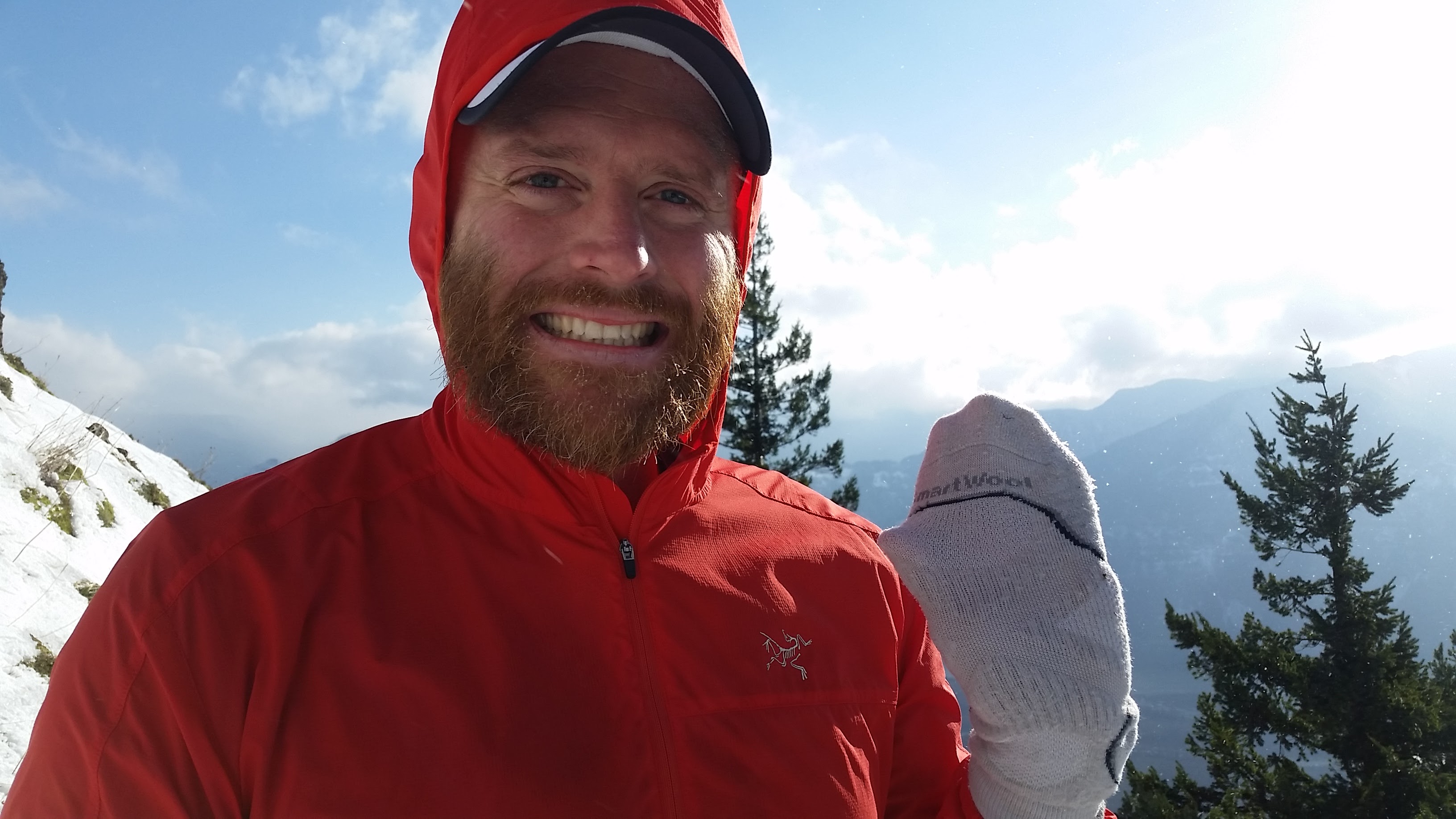 Adams “gloves”. I get the feeling that they worked like mittens. (January 2016)

We finished that “run” with a stop by a beautiful frozen waterfall. Happy to be off the windy ice death trap of a trail! 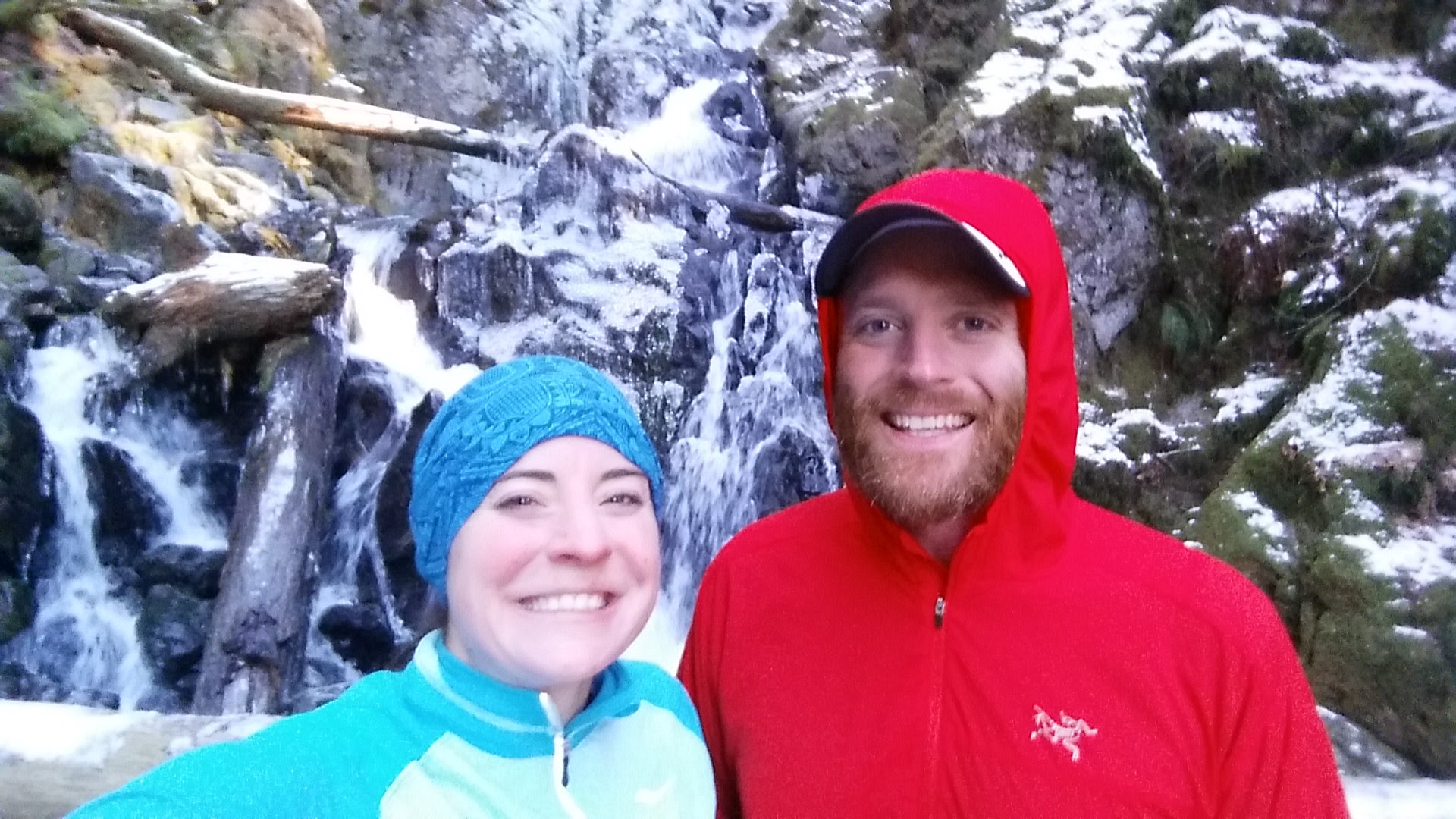 Hardy Falls at the base of the Hamilton Mountain Trail – frozen waterfalls are so pretty! (January 2016)

Alright, I promise that’s the last “cheating on Ithaca” picture. But I figured, it was still snowy, and felt like Ithaca. I suppose if Ithaca found out though…there’d be drama.

……back to Ithaca! We still run with friends, and even drag them on a few trail runs. Here we convinced Amy and Phil to join us for part of a 20 mile run in Danby State Forest along the Finger Lakes Trail (FLT): 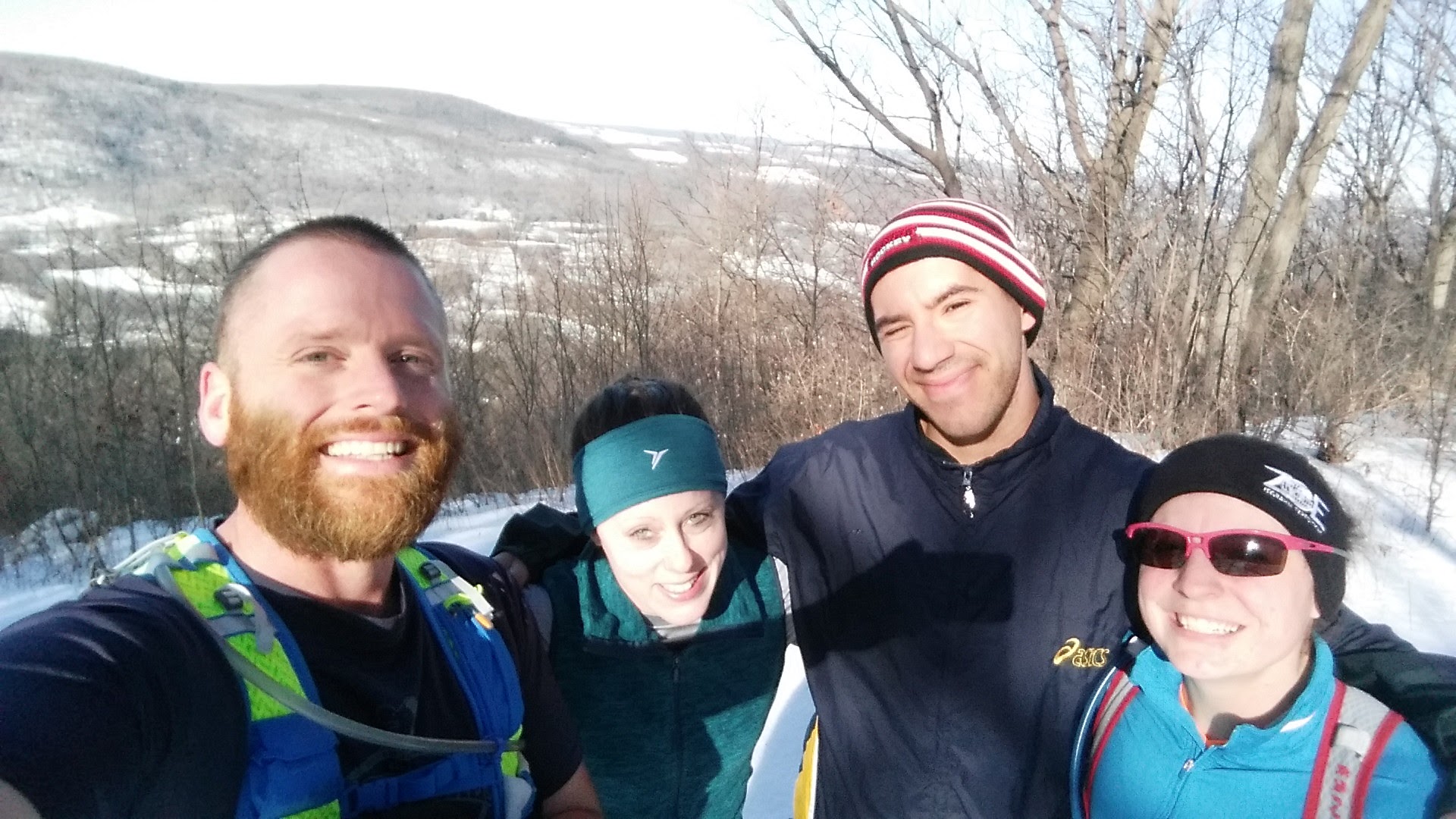 We’ve really grown to love the FLT through this winter. It is a safe refuge from the snowplows on the roads. Also, it is quiet. Ah, the serenity. I’m looking forward to watching the trail change as summer comes along.

Here is one quick snap of a beautiful winter sunrise, though not on a trail. I find I run later in the day during the winter to run during warmer temperatures. Like, anything above freezing, if possible.

Cornell University has some beautiful architecture which doesn’t stand a chance against mother nature in aesthetics. (February 2016)

And to add to the icy facial hair pics, I present Ice Eye Baby: The Lashening. 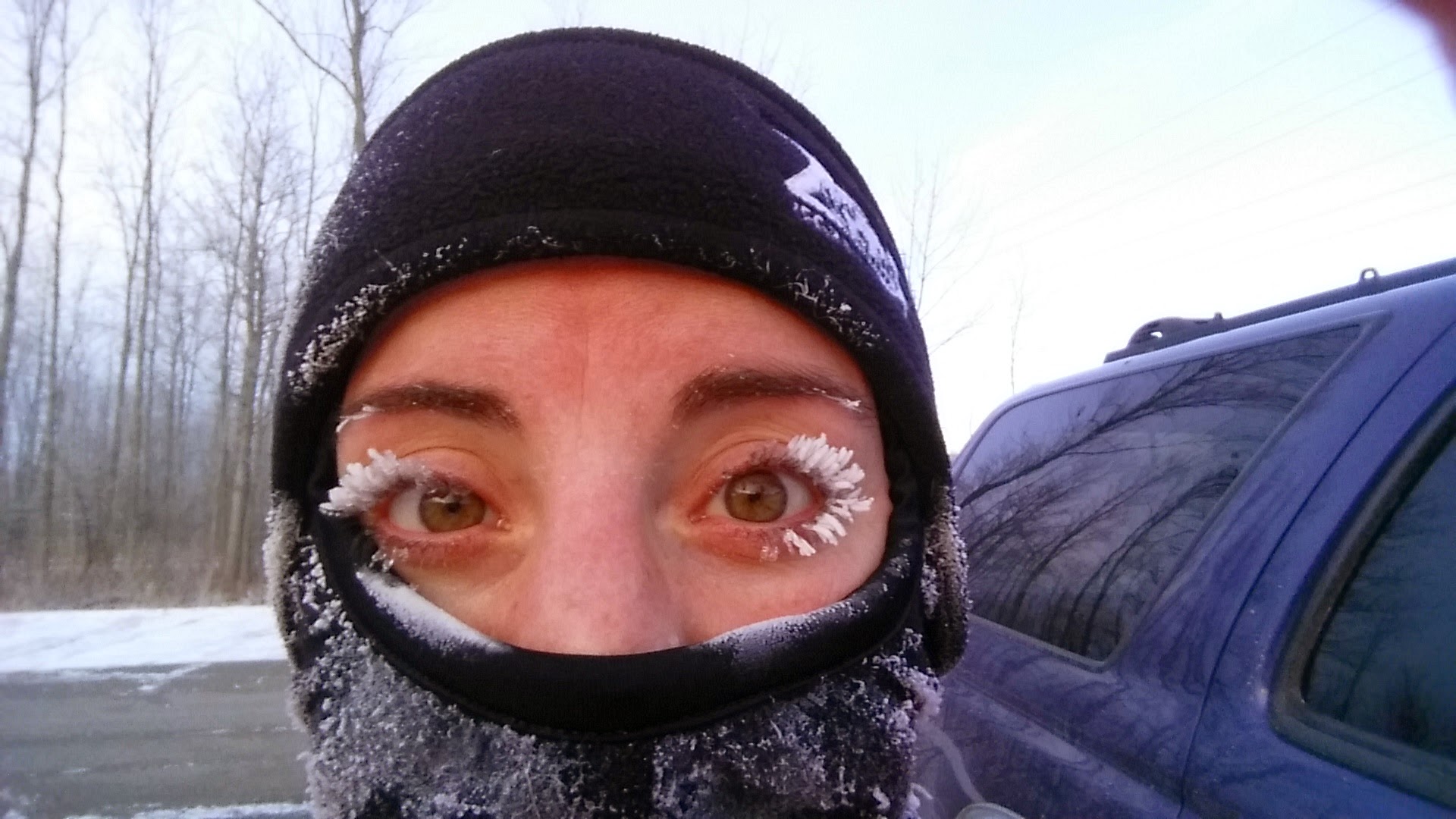 I almost wish this was fake, at least so that they were reproducible. Snow flake eye lashes! (January 2015)

I get asked often if I run through the winter. Yes, yes I do.*

Anyway, I hope you enjoyed my round of winter pictures! Thank you to Adam who inspired/suggested that I also add some of my photos!

Now to appreciate the warm office I’m sitting in with a warm cup of tea. mmmmmmmmm

*unless temperatures drop below 0 degrees F. No, thank you.